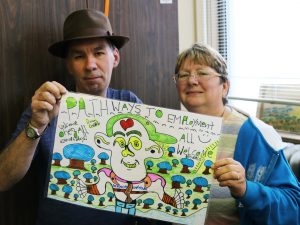 ROME — CSEA Central New York DDSO Local members are among the state Office of People with Developmental Disabilities (OPWDD) employees championing a pilot program that they believe is a vision of the future for our members employed in direct care: Pathway to Employment.

The Pathway to Employment program is one of several types of OPWDD Care Pilot programs established in 2015.

Our Central New York DDSO Local members are determined to make Pathway to Employment a success in the community.

CSEA members have worked tirelessly to establish community connections with local business owners and managers to pitch the program.

“They stop in places where they don’t even know anyone and say ‘we got someone who is willing to come in, I stay with them one-on-one,I provide the transportation, they do the job, everything is great, you can do other work that needs to be done for your business,’” said CSEA Central New York DDSO Local 5th Vice President Patti Beer, who works in the Pathway to Employment program. 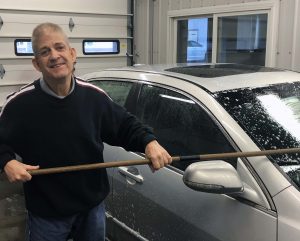 Donald H. washes cars at his internship at the Whitesboro Frame and Body Shop.

“There’s a lot of [types of jobs]out there,” Beer said. “I’ve never worked on a farm, for example, but I still want to go to that farm and see what it’s like. I think I won’t like it, unless I got really high rubber boots and gloves on, but then again, I might love it.”

Like anyone else in the workforce, if an individual is dissatisfied with the job, they are not obligated to stay.
If [the individual]doesn’t like [the job], they don’t have to go back,” Beer said. “It’s all about the person and this program is definitely person-centered.”

CSEA members who work on the Pathway program are willing to try to make any individual’s dreams for working a reality.

“I think one of the most important things for this program is that it’s OK if you fail,” said former Central New York DDSO Local 3rd Vice President Matt Spellicy. “If you tried something, but you didn’t like doing it, hey, you tried.”

Many OPWDD staff believe the more work individuals are able to do in the community, the more they feel valued.

“I think before [Pathway], [individuals]felt they didn’t have much value in the community,” said Derek Coffin, a direct support assistant. “Now they go out and they’re seeing how much they have to give to it.

They’re needed, people are excited to see them, they’re making a difference in people’s lives, and they are a part of the community.” 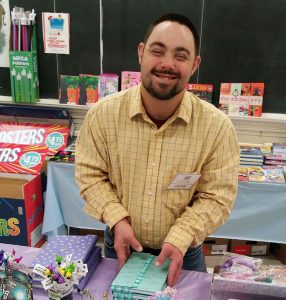 Countless success stories
While the point of the program isn’t to secure a job for an individual, it can sometimes be the result. One of the individuals who worked through the program is now employed at Walgreens. Pathway staff enjoy stopping in the store after work to say hello.

One individual in the Pathway program wanted to become involved after hearing about it from other program participants.

The individual volunteers at a historic site in the mornings, and then comes to work with Dawn Larsen, a direct support assistant, and Pathway in the afternoon.

The individual helped sort flowers and moved them around the shop. The individual has also been helping wash pumpkins and cleaning out the greenhouse.

Linda Jackson, a direct support assistant, had one individual move from Florida to Taberg with her mother. 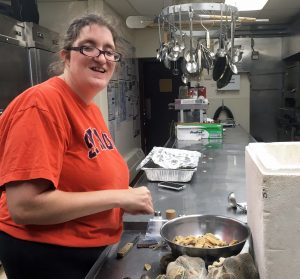 The individual had some cooking skills, and there happened to be a bar and grill down the street from her home.

“We started her [at the restaurant]doing prep work for tacos, just cutting onions and tomatoes and stuff like that,” Jackson said. “She did so well at it that now she goes in every Tuesday, Taco Tuesday, and they gave her a workstation of her own.”

She’s been so crucial to the restaurant that management often calls her in to help on other days.
Another individual, who staff were told wouldn’t fit well in the program, succeeded beyond everyone’s expectations.

A filing room at the Rome Hospital hadn’t been touched in a long time, but over the course of a couple month, he had the entire room alphabetized. He still reminds the staff of his accomplishment.

CSEA members going above and beyond
One of the biggest challenges facing this program is transportation. Rules and regulations prevent staff from using their personal vehicles, so staff are often spending valuable time finding transportation for their individuals.

“These folks, they’re not even on duty yet and they’re looking all over trying to find a vehicle,” Central New York DDSO Local President Don Page said. “So, you talk about dedication, this is dedication. They’re doing all this work before they even set foot in the door … this is dedication on their part, this is CSEA’s future vision of how things are going to be.”

Central New York DDSO local member Erica Cunningham, left, with Jade T., a member of Pathway to Employment Program. Jade has done numerous internships and is happy to be a part of the program.

Our members fight for every individual to be included because they believe everyone can benefit from this program.

“I can’t even tell you how many times we’ve had people coming in or going to meetings and saying, ‘that’s not for them; they can’t do that,’” said Erica Cunningham, a direct support assistant. “And if we can just get them into the program, those same people are blown away by what they accomplish.”

“People just don’t understand the value of how this is so person-centered, it’s completely different than anything they’ve ever done,” Cunningham said. “It’s going to be an opportunity for them to make some big decisions for themselves.”