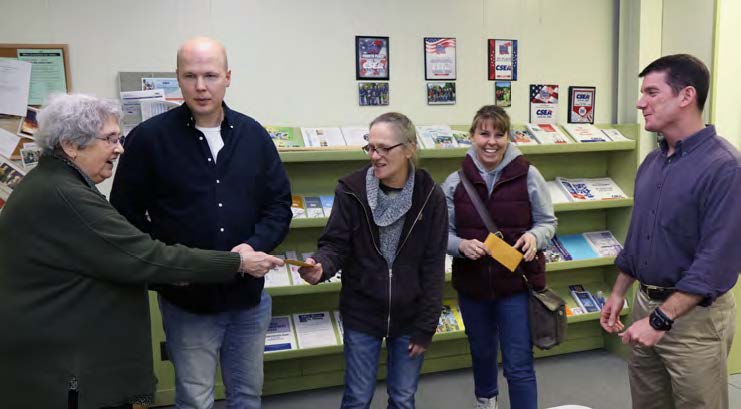 HERKIMER — When our members faced a sudden loss due to a natural disaster, our union family was there to help get them back on their feet.

Our members received gift cards from the AFSCME Fallen Heroes Fund. The donations were matched by the Herkimer County and Mohawk Valley Psychiatric Center Locals.

“It’s tragic when our members suffer from natural disasters like this,” said CSEA President Mary E. Sullivan. “It’s truly heartwarming to see when our union family is able to help them when things are at their worst.” 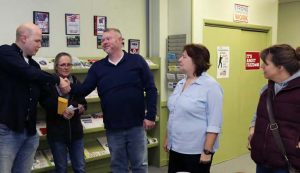 CSEA Mohawk Valley Psychiatric Center Local President Eric Hall, center, presents a check from his local to co-worker and fellow union officer Mike Fairbrother, left, to provide a small measure of relief to Fairbrother, whose home and possesions were damaged in severe flooding on Oct. 31. Herkimer County Local President Beth Hall, second from right, also presented checks from her union local to members Ruth Mamrosh and Heather Borden, who were also affected by the flooding. Photos by Mark M. Kotzin.

“It’s tremendous to know you have support like that and that someone is in your corner, and in this case, it’s CSEA. It’s great that our union was able to do that for me,” Mohawk Valley Psychiatric Center Local Executive Vice President Mike Fairbrother said. “It seems like some people would say it’s a small gesture, but it’s a lot and it’s something. It’s one less headache regardless of what you use it for, which is really nice.”

Fairbrother, a supervisor in the Sex Offender Treatment Program at Central New York Psychiatric Center, had more than four feet of water in the basement of his Yorkville home. The flooding ruined his furnace, washer and dryer, as well as more than 1,000 books he had been collecting for years.

“Maybe two (books) were salvageable,” Fairbrother said. “I said, ‘That was the first thing I was going to do with the gift card was go buy a book.’”

Fairbrother admits that his home wasn’t as badly devastated as other area homes.

“After all was said and I done, I could say I have absolutely nothing to my name. CSEA made sure that wasn’t the case,” Fairbrother said.

Samuel Bartlett, a secure care treatment aide at Mohawk Valley Psychiatric Center, was also among the members to receive a gift card through the fund.

Heather Borden, an account clerk at West Canada Valley School, saw her Newport home filled with water in her basement, living room and garage. The damage totaled three cars and caused structural damage to her home.

“I’m glad we were able to provide even just a little bit of relief for our members,” Herkimer County Local President Beth Hall said. “It’s exactly these kinds of situations where we’re lucky to be able to come together as a union and look out for our brothers and sisters.”