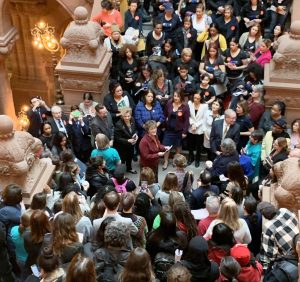 CSEA/VOICE Local President Pamela Wells speaks to the very large group of providers and advocates at the Rally for Child Care at our state Capitol.

For the third consecutive year, the providers participated in meetings with state lawmakers, including State Sen. Betty Little and Assemblymembers Chris Tague and Carrie Woerner. Providers also rallied with colleagues and advocates on the Million Dollar Staircase at our state Capitol.

Wells and Brandt also made the case that adequate funding has effects beyond keeping parents earning and children learning. It not only has a profound effect on child care provider’s small business, but also their ability to offer community members employment as assistants and ultimately to boost the local economy.

“Lack of funding in child care is not just an issue for the children and families we care for; it’s also a work force issue,” Brandt said.

Brandt’s funding discussion with State Assemblymember Chris Tague made an impact. While Tague, a Republican, offered to draft a bill providing for additional child care funding, he requested a woman from the other side of the political aisle to co-sponsor. 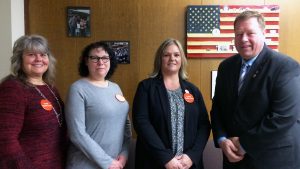 Later that day, Wells and Brandt had successful talks with Assemblymember Carrie Woerner, a Democrat. Woerner said she would consider working with Tague on this.

Wells and Brandt also brought up the significant impact new federal rules regarding expanded background checks were having on providers, as reported from across the state by our CSEA/VOICE members.

Providers were suddenly forced to wait anywhere from one to two months to hire new workers, under the new requirements, despite having been promised no more than two weeks. In many instances, this forced them to operate under capacity to meet adult-to-child ratio requirements.

“We’ve been fighting to ensure our voices are heard on this,” Wells said. “This was a very important issue to solve because of the time involved in getting people processed. While we agreed with the safety more comprehensive background checks provides us, we disagreed with its implementation.”

Three days after Lobby Day, CSEA’s ongoing discussion about clearances with the state Office and Children and Family Services (OCFS) resulted in OCFS changing their guidance on this new federal regulation to “ease the burden on programs and parents.”