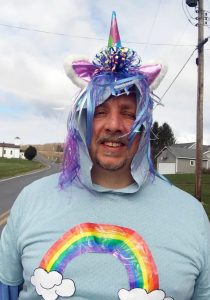 GROTON — Why did the 6-foot tall chicken cross the road?

Well, it wasn’t really a chicken, but a Groton Central School District teacher aide delivering school meals dressed as one.

Many workers at school districts across the state have been delivering students’ meals to their homes during the COVID-19 pandemic. While providing this essential service, CSEA Groton School District Unit member Chuck Hendrickson Jr. has been going above and beyond to help children cope and brighten their days at home.

He comes to work dressed as a chicken, Teenage Mutant Ninja Turtle or any other costume he can find or make.

Bringing smiles during a difficult time
Hendrickson Jr. was hired as a teacher aide around the same time the pandemic forced schools to close statewide. But as an active member of the community church and a program teacher at the YMCA, Hendrickson has gotten to know the Groton students and didn’t pass up a chance to see them.

Hendrickson Jr. has also dressed as Elmo, a knight in armor (including a fake sword), and has more costume ideas and designs in mind. One might wonder where he’s gotten them all since most stores are closed, but Hendrickson Jr. said he usually dresses in costume for holidays.

“I’ve been dressing in costumes for years,” Hendrickson Jr. said. “Now, I do it because I know it makes the kids laugh and makes them smile.”

It’s not just the students who get a kick out of it either. His costume pictures are posted on a Village of Groton Facebook group and have brought smiles to the whole community and his co-workers.

“Chuck brings happiness to the families who might otherwise have a gloomy, sad day,” Tompkins County Local 2nd Vice President and Groton Central School District Unit President Tracy Cooper said. “The parents and students look for his deliveries every day in wonder of what his next costume might be. Chuck not only delivers the breakfasts and lunches; he also provides a wave and a little dance for the community’s entertainment at each and every stop. Chuck has also influenced several co-workers to join him in his joyful efforts.”

Although it was chaotic around the time of Hendrickson Jr.’s hire, Cooper was eventually able to connect with him and sign him up as a CSEA member during this “new normal.”

“This time is challenging for everyone, but it is important, now more than ever, to try and make sure that all employees are signed up [for our union]who are eligible and willing and assure them they have our union’s support to help make sure they get paid during this hardship,” Cooper said.