Trending
You are at:Home»COVID-19»Pandemic gives DOT workers a special mission

DOT workers have been playing key roles in maintaining COVID-19 testing sites throughout the state, including ones in Staten Island, top, and Long Island, bottom. (Images provided by Richard Crawley.)
COVID-19

By Jason Hosier on May 1, 2020 0 Comments
DOT workers have been playing key roles in maintaining COVID-19 testing sites throughout the state, including ones in Staten Island, top, and Long Island, bottom. (Images provided by Richard Crawley.)

MONTICELLO — It’s not uncommon for CSEA members working for the state Department of Transportation to deploy to other regions after natural disasters or extreme winter weather.

Some DOT workers, however, have been traveling the state recently for an entirely new mission. They’re getting materials where they need to be, taking supplies from a central location to COVID-19 testing sites across the state. 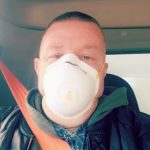 “There are masses out here that need the help and need the supplies,” said Richard Crawley, a shop steward for the Floyd Culligan Sullivan County DOT Local. “It feels good to be able to help them and support them.”

Crawley and several other members of his local stepped up when a call for volunteers went out. The deployment, as they call it, has them working nearly every day delivering needed goods as far out as Stony Brook on Long Island to smaller counties upstate near the Canadian border.

Working nonstop
Each morning, workers meet at a warehouse not too far from their regular worksite. They each receive their itinerary for the day, with each worker hitting different testing sites across the state. Their trucks are filled with the necessities and then workers then hit the road. They keep cleaning supplies with them and then disinfect trucks at the end of the day.

“We’ve brought N95 masks, gloves, gowns, Tyvek suits, and pallets of water to the test sites,” said Diane Bull, a longtime local activist. “We’ve even brought MREs for the members of the National Guard working there. More than anything, though, it’s about getting PPE to the test sites.”

Sites in higher volume locations, such as Long Island, New York City and Westchester County, require frequent supply drop-offs. Upstate, where the number of cases has been lower, our members are still helping workers stay prepared.

“A few places I went to up north were smaller set-ups at the local ambulance corps or firehouses,” said Bull. “Everyone has been appreciative when we arrive.”

DOT workers have been playing key roles in maintaining COVID-19 testing sites throughout the state, including ones in Staten Island, top, and Long Island, bottom. (Images provided by Richard Crawley.)

DOT members have helped set up different state-run testing sites from the beginning. Along with National Guard members, county and state public health workers, and others, DOT workers first helped set up the first mobile testing site in New Rochelle, the site of the initial outbreak.

“Rich [Crawley] and I did a night up at Bear Mountain State Park when that site was getting set up,” said Austin Ihlefeldt, another volunteer. “It’s been great seeing how many people from DOT across the state have helped.”
“I’ve been a volunteer fireman for 18 years and I have nurses in my family, so I’m glad I’m able to do my part,” said Ihlefeldt, who serves as assistant chief of the Callicoon Center Volunteer Fire Department.

This special mission has meant long hours and time away from family for many, but our members say the work has been meaningful.

“It feels good to help our community during this critical time,” said Bull. “I know people who’ve gotten sick feel helpless, so we’re glad we are getting supplies to these sites that allow people to be tested and get on the road to recovery.”

Workers say the commitment they’ve made to doing their part won’t end any time soon.

“We’re on this mission until it’s done,” said Crawley.