No state fair, but members keep grounds in shape 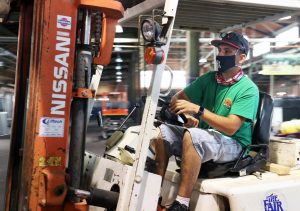 SYRACUSE — Throughout his 17 years working at the New York State Fairgrounds, CSEA member Anthony “A.J.” Petrini and his co-workers on the fairgrounds’ Events Crew know it’s showtime when the calendar flips to August.

“It’s been years of every August, I go into a different mode,” Petrini said. “Summer is over for me August 1.”

But this summer — and year — is different for the about 80 CSEA members who work at the fairgrounds.

In early July, Gov. Andrew Cuomo announced that the state fair would be canceled due to the COVID-19 pandemic. This year marked the first time the fair has not been held since World War II. 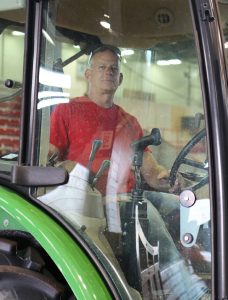 State Fair Worker Michael Chrysler drag rakes the horse arena ahead of a horse show at the fairgrounds.

This was supposed to the be the first year the fair would run for 18 days, five more than usual — a challenge Petrini and the crew were already preparing for.

The Fairgrounds hosted the Central New York RV show in early March, shortly before COVID-19 began to change the landscape of our country.

“We had heard a bit about the virus, so we started some new protocols and doing extra cleanings with bleach and water to wash down doorways and sanitize as much as possible,” Petrini said, recalling the workers’ early response to the virus.

When COVID-19 brought the state to a halt, Events Crew workers faced uncertainty. 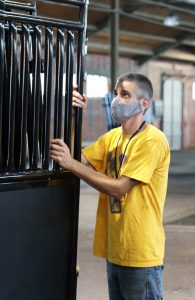 “We had about a week where there was nothing at all,” Petrini said. “It was different and morale was down because we didn’t know what was going on. We’re the Events Crew and we didn’t know what kind of events would be going on. No events kind of cancels the need for an events crew, so it was scary for a lot of people.”

Crew members were put on paid leave for two weeks as the state figured out the next steps.

Workers soon returned, and the Fairgrounds hosted a spring blood drive at the Expo Center. This encouraged Petrini that they would be able to hold events by embracing the “new normal” with social distancing, wearing masks and extra cleaning.

At that point, workers had been told the fair was still a go.

All work, no Fair 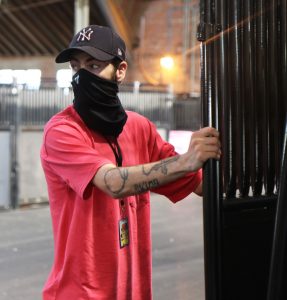 Despite the cancellation of the state fair, most of the events, particularly horse shows, are still happening as planned — and there is no shortage of work for Petrini and the Events Crew.

“It gives us extra time to do things we normally wouldn’t be able to do,” Petrini said. “We’ve been cleaning light fixtures, conduit, and plumbing fixtures. We’ve just basically been going to every building we have and going top-to-bottom cleaning way more than normal.”

The Events Crew has also assisted with the drive-thru food booths in the parking lot and the renovation of the main horse barn. The building was completely gutted and the old wooden stalls were taken out and new, portable stalls are being installed by Petrini and his team.

“I think just with the way things are, we’re just trying to be as cautious as possible,” Petrini said. “We want the events to come back, so we’re willing to do whatever it takes.”