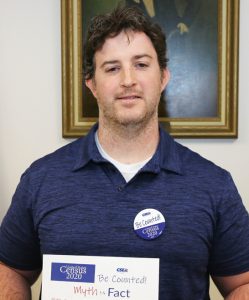 In this file photo from early
2020, Gordon Ward stresses the importance of participating in the
U.S. Census.

CANTON — When you vote in the 2020 election, it’s important to know that people who help in the election process are often CSEA members.

St. Lawrence County Unit member Gordon Ward serves as the Democratic Deputy Commissioner at the county’s Board of Elections (BOE).

Fueled by a longtime interest in politics, Ward thinks his job has a big impact on his community.

“We have to run the elections and get out the legal notices to let people know when elections are and what polling places are open. We try to reach out on social media as well in a nonpartisan way to inform people,” Ward said. “We also let people know how to run for office if they’re interested and help guide them in the right direction as to how to go about doing that.”

“I think one of my favorite things [about this job]is that it changes throughout the year,” Ward said. “It’s changing because there are different election cycles, depending on if it’s a federal year or local year.”

When COVID-19 began to affect New York earlier this year, the county’s BOE had to limit the number of people in the office due to executive orders, and not every part of the job can be done from home. Still, the BOE got the job done, including through primary and general elections and an expected record number of absentee ballot applications.

Ward estimates a 60 percent increase of absentee ballots in St. Lawrence County, a significant increase even in a county of about 100,000 residents. “We have the staff to deal with a certain number of absentees and registrations,” Ward said. “Basically, every county is getting hit hard.”

Ward said the ballot counting process as very strict. Bipartisan teams sit at a table and count ballots for specific districts and make sure the count matches what the counting machine calculates.

“I’d like to build up voter confidence in the system,” Ward said. “There’s a lot of checks that make the system strong.”

Ward stressed that voting machines — and the process — are secure.

“Our voting machines are not connected to the internet in any way, so there’s no way they can be hacked electronically,” Ward said. “I just want people to be confident in the electoral process.”

While people may think their vote won’t count, Ward said that couldn’t be any further from the truth.

“Every year, we see races where the winner is chosen by one or two votes,” Ward said. “We actually had a tie this year where one person’s vote would’ve changed that race. A lot of times, people think their vote doesn’t matter that much, but at our office, we see that it does matter. Everyone’s vote has a significant amount of weight.”