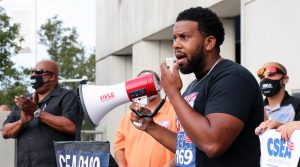 Several dozen participants, wearing masks, rallied outside district offices in downtown Yonkers. The district said the three-week period of furloughs were due to school buildings being closed until Oct. 5, but speakers at the rally said the furloughs offer the district minimal savings while making it difficult for workers to pay their bills.

“I am heartbroken; I am angry,” said Yonkers School District Unit President Dulani Turner. “We are tired of people who make $100,000 or more, a quarter million dollars or more, deciding the fate of those who barely make ends meet.”

Yonkers School District Unit 2nd Vice President Yvonne Couto, a bus monitor, said it wasn’t long ago that these same monitors received praise from district leaders for taking care of students into the early morning hours when afternoon buses became stranded across the city during a blizzard.

“We have to figure out how to feed our families and how we’re going to pay rent in October,” said Couto. “If [management]cared, they would have said, let’s take care of the lowest paid people so they’re not worried about how they’re going to feed their families.”