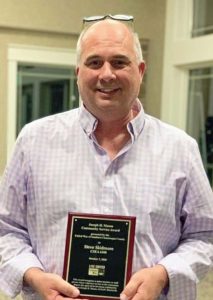 JAMESTOWN — Now and then, good work gets noticed — and it recently happened to one of CSEA’s own union members.

The award honors a member or staff person from the organized labor community who makes outstanding social contributions through volunteer service. Prior recipients play an active role in selecting each recipient.

Due to the COVID-19 pandemic, this year’s selection process presented challenges, including holding virtual meetings via Zoom. The award ceremony was held October 7.

“Steve honors the Mason family legacy in many ways, and the United Way of Southern Chautauqua County is pleased to name him as the 2020 Joseph H. Mason Award winner,” said Amy Rohler, executive director, United Way of Southern Chautauqua County. “With the event limited to 50 persons, we were pressured to keep it small, but it was a terrific event nonetheless.”

Skidmore, who is employed in Chautauqua County Public Facilities Department, said by virtue of members electing him as a CSEA officer, it has given him the mobility and opportunity to give back.

“I have seen firsthand how volunteering and stepping up creates stronger bonds between co-workers, unionists, friends and family,” said Skidmore. “By building better connections and more powerful attachments to the people in your community, the benefits and rewards naturally follow. If you feel the need for deeper connections with your co-workers or the people in your community, try volunteering. It’s good for your soul.”

In addition to his extensive involvement with CSEA and the labor community, Skidmore volunteers for many neighborhood organizations as well.

Skidmore’s early volunteer activities in the community include being a volunteer softball and soccer coach and a treasurer for the East Randolph Fire Department. He is also very active in the Elks Club, which includes volunteering to work at an annual holiday party for more 300 clients of ASPIRE and The Resource Center. He has volunteered at the Special Olympics Flag Days through the Elks Club, as well volunteering for several activities involving veterans’ groups. Skidmore’s family also serves as a host family for Babe Ruth World Series.

He is a past recipient of the Jamestown Labor Council’s George Ritzer Award. Skidmore has also served as the longtime treasurer of the Jamestown Labor Council. Before becoming a CSEA member working for Chautauqua County, Skidmore had been an organizer and the president of District 65 International Association of Machinists and Aerospace Workers, as well as the president of Local IAM 2111.