Hillary Acomb prepares to descend down the cliff side at Watkins Glen State Park. Her family has a history of working for parks and she’s making them proud as the only woman on the scaling team.
Central Region

By Nicholas Newcomb on April 22, 2021 0 Comments
Hillary Acomb prepares to descend down the cliff side at Watkins Glen State Park. Her family has a history of working for parks and she’s making them proud as the only woman on the scaling team.

WATKINS GLEN — Hanging off a 200-foot cliff with rocks and debris falling all over would be a terrifying job for most people.

But for CSEA Finger Lakes State Park Commission Local members who are employed by the scaling team, it’s a walk in the park.

The scaling team is a group of state parks employees with special training to rappel down cliff faces to knock down any loose rocks and debris.

The importance of this job was made well-known after an incident four years ago, when Nancy Ladd-Butz was paralyzed after she was hit by a rock while hiking at John Boyd Thatcher State Park in Albany County. New York State ended up paying a $9 million settlement.

Since then, the state has invested more into the scaling program in an effort to prevent another accident. 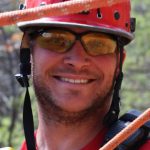 “The work we do is important. The more rocks we can dislodge each year, the better. We’ve seen big improvements in these areas year after year the more we do it,” said Dustin Karius, a 14-year parks employee. “We have to watch out for our safety, of course, but the public is our main goal, keeping them safe.”

Hillary Acomb, a member of the scaling team, grew up near a park. Her grandfather and great grandfather worked for parks and her uncle is a park manager. For her, working in parks is like a family tradition. 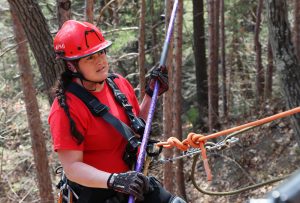 Hillary Acomb prepares to descend down the cliff side at Watkins Glen State Park. Her family has a history of working for parks and she’s making them proud as the only woman on the scaling team.

“It’s pretty meaningful [to carry on that legacy],” Acomb said. “I have a lot more passion for my job because of it.”

At the moment, Acomb is the only woman on the scaling team and admits that can be difficult sometimes, but her work ethic and passion for the parks keeps her going.

“I like the hard work, the manual labor, and keeping everyone safe so they can enjoy the parks,” Acomb said.

Not your average office

Karius has been working with the parks system since 2007 and has been a member of the scaling team since 2009. 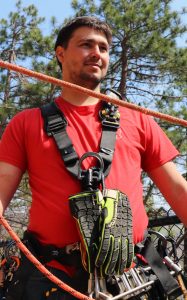 Justin Kelly, a member of the scaling team at Watkins Glen State Park, is among the CSEA members who work to ensure that the public can safely enjoy the park.

Karius is a mason at the Watkins Glen State Park, but as a member of the scaling team, he gets the chance to visit and scale other parks around the Finger Lakes and Niagara regions.

“It gets me out of the park and to some other parks,” Karius said. “I get to meet new people at other parks and go through gorges, and [I like] the adrenaline rush. I’ve been doing it for so long, you’ve got to help the parks out because this [job]isn’t for everyone.”

The job certainly isn’t for everyone, but seeing New York State’s beautiful waterfalls and gorges from new and exciting places makes for a fun “office” for daring state park workers.