Trending
You are at:Home»CSEA fought and won»‘It’s given me peace of mind:’ Workers react to end of DMV policy

‘It’s given me peace of mind:’ Workers react to end of DMV policy

Editor’s Note: CSEA members employed at the state Department of Motor Vehicles worked with union leaders to urge the agency to end its ‘instant notification’ policy that placed Motor Vehicle License Examiners at risk. On these pages, DMV employees discuss their experiences and reaction to the new electronic notification policy. Click here to learn more about the union’s fight.

It’s the end of the road for instant notification following a state Department of Motor Vehicles road test and motor vehicle license examiners (MVLEs) are feeling like it’s Christmas in July.

“I am so appreciative of our union,” said Nichole George, a MVLE based in the Metropolitan Region. “Every day, [our union is]fighting to make things better for us.”

CSEA members, officers and staff worked tirelessly over several years to urge DMV officials to end the instant notification policy, which required MVLEs to provide immediate road test results to applicants — while seated in the test taker’s vehicle. The unsafe policy had yielded angry, and at times threatening, reactions from applicants who failed road tests. MVLEs have been subjected to countless verbal and physical assaults by applicants. Some workers have been followed, spit on or struck with objects by angry test-takers.

Thanks to CSEA members’ efforts, DMV officials recently implemented a delayed notification policy for road test results. MVLEs now provide an applicant with a card that instructs them to visit a DMV website, where test results are posted later that day.

“It was the best thing that the DMV could have done for us,” said George. “Every day, you want to come home to your family, and you don’t want a road test to be the

For Dorothy Thomas, a 33-year veteran MVLE on the cusp of retirement, learning of the new protocols seemed like a fitting way to end her career.\

“It took a huge push and many years for our union to get this done,” said Thomas, who recalled while instant notification was originally deemed as a customer-friendly measure, the policy backfired when MVLEs became the recipients of repeated customer abuse.

Thomas credited the recently created New York City DMV Unit, and its officers Dawn Destine and Ben Greene, who prioritized the issue along with other DMV activists from across the state, and were relentless in their pursuit. 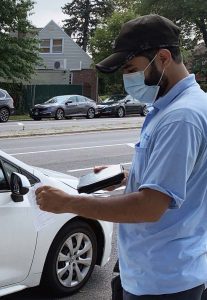 “One of the highlights of working on these changes for me is seeing members like Dorothy, who mentored me and fought for these changes over the years, finally see the fruits of their labor,” said Destine. “This is not for me, but for everyone else who comes after me.”

Workers feel safer
Along with George, MVLEs across the state say they now feel safer on the job.
“It’s a big relief,” Veronica Zito, a MVLE in the Metropolitan Region, said of the new policy. “We feel like we can breathe now. We are not afraid anymore.”

Zain Chaudhary, a MVLE in the Metropolitan Region, is also feeling relief.

“It’s given me peace of mind,” Chaudhary said. “It doesn’t matter the (road test) location where we work; there are no problems.” 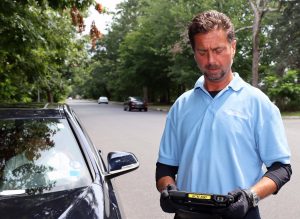 Kerri Malenda, a MVLE on Long Island, is also relieved about the new electronic notification policy.

“Safety is paramount. Scheduling a time for applicants to get their results later in the day eliminates the risk of confrontation and escalating situations with the applicants, ” said Malenda. “CSEA’s [efforts]shows that our union cares about members and is concerned about their safety.

CSEA member Maribel Cruz-Alvarado, a MVLE in the Hudson Valley, said she is grateful that she’s no longer dealing with the uncertainty that resulted from not knowing how test takers would react if they failed their road test. 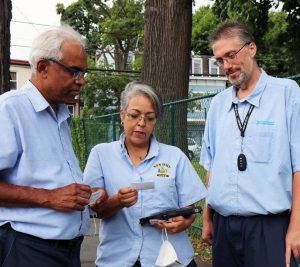 “It’s less stressful and people seem much calmer,” said Cruz-Alvarado, an activist from the CSEA Mid-Hudson State Employees Local. “Some people are disappointed that they can’t get their results right away, but I think the majority [of applicants]are OK with it because they know that at night, they’ll get their results.”

Cruz-Alvarado said that one of the benefits of the new system has been that she is less stressed when she goes into the next test.

“Some people would take [failing]not so nicely,” she said. “You had to go from that energy to another applicant, make a fresh start and try to forget what just happened. That last test was still in the back of your mind.”

While the new system is an adjustment for some MVLEs and applicants, it still provides solid customer service. In addition to informing test takers of their results, MVLEs can provide feedback on why they failed.

“At 6 o’clock, applicants can log onto the website, punch in their ID number and it’ll tell them if they passed or failed,” said Cruz-Alvarado. “If they failed, it will give them details of why they failed. It’s a full explanation.” 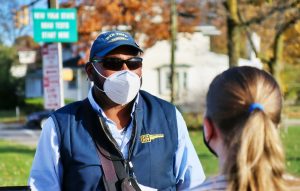 Roland Poles, a MVLE based in the Rochester area, said that heightened emotions during road tests had become even more common in recent years.

“The job of a MVLE has always come with some risks,” said Poles. “But, getting into a verbal or physical altercation with someone because they failed their test became [more common]and not the exception.

Now, with delayed notification, we are seeing the number of negative incidents decrease.” Poles also said the MVLE job comes with a mix of joy and sadness.

“You can’t help but empathize with those who are seeking driver licenses,” said Poles. “We always have to be on guard. Communicating clearly before the exam on exactly what to expect and to have the proper documentation with them beforehand often diffuses a lot of tense situations we experience. In the end, we are just trying to keep ourselves and the traveling public safe.” 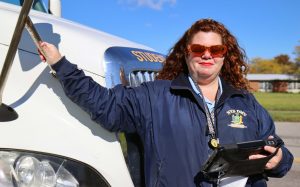 In this file photo from late 2020, Lorraine Corcoran is shown at a testing site.

Lorraine Corcoran, a MVLE based in Buffalo, said it’s important for DMV employees to continue to document incidents of workplace violence.

“The only way we can improve health and safety standards on the job is by providing necessary feedback about our experiences,” Corcoran said. “By being in a union, we have that power. We have a voice.

Hopefully, this new policy can help remedy most notification issues so we can get back to the business of serving the public the best way we know how.”
While it took time for the electronic notification system to be implemented, Cruz-Alvarado said having it in place helps workers reach their ultimate goal.

“We’re just trying to end the day peacefully so we can go home in one piece,” she said.