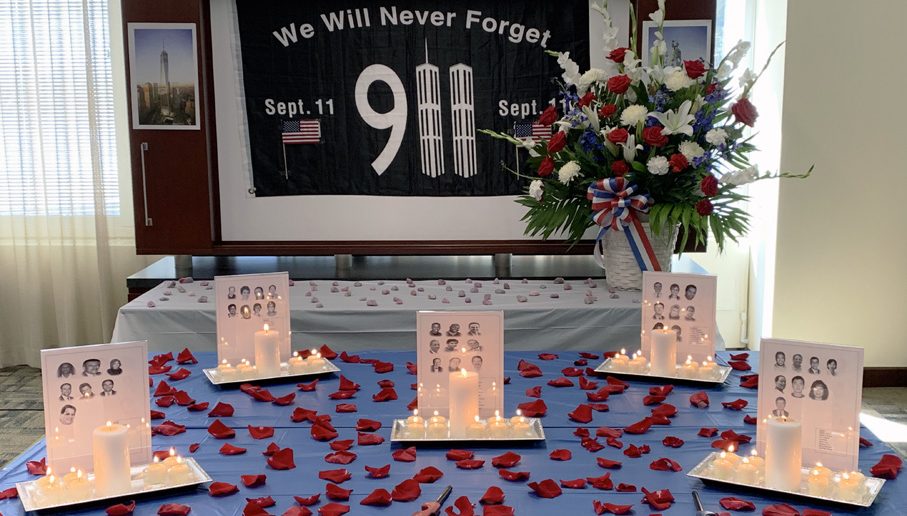 BROOKLYN — Forty people who worked for the state Department of Taxation and Finance went to work at the World Trade Center on Sept. 11, 2001 and never came home.

These workers, including five CSEA members, were honored by their co-workers, union representatives and elected officials during a recent solemn ceremony 20 years after the terrorist attacks on the World Trade Center that killed nearly 3,000 people. 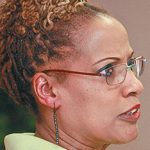 “We remember and honor the men and women of the New York State Department of Taxation and Finance who went to work on that glorious morning of September 11, 2001 never suspecting, never expecting, that it would be their last day on earth,” said CSEA Executive Vice President Denise Berkley, who participated in the ceremony.

At the state Taxation and Finance office in Brooklyn, a permanent memorial has been built and offers images and other items associated with that fateful day. 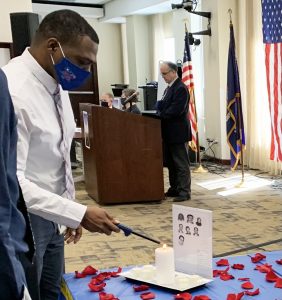 CSEA Taxation and Finance (New York City) Local President Jamel Harewood lights a candle during a ceremony to mark the 20th anniversary of the September 11 attacks.

The memorial was the first thing Department of Taxation and Finance (New York City) Local President Jamel Harewood saw when he started working for the department.

“It hit home after I started working at the department,” said Harewood, who was a high school senior at the time of the attacks. “I saw the names of all the people that we lost. That really struck me.”

Ceremony speakers, who also included New York Lt. Gov. Brian Benjamin and acting Taxation and Finance Commissioner Amanda Hiller, also paid tribute to all the first responders and workers who responded to the attacks. Many of these workers included CSEA members from across the state, who came to the site to volunteer in the rescue, recovery and cleanup efforts. 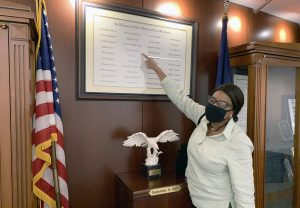 “I can still see the faces of all 40 people because I worked with them,” said Margaret Ramsay, a tax compliance agent who worked in Tower 2 (South Tower), where the offices were located. “I still kept hope that some of them were going to be found someplace else and not in the rubble of the catastrophe.”
Berkley noted that, “When we say ‘never forget,’ we need to make sure we mean it.”

She recalled the premature death of Metropolitan Region and former CSEA Statewide Occupational Safety and Health Committee Chair Frank Cosentino, who had worked near the site and whose death may have been linked to 9/11-related illnesses.

“Let’s never forget about them and let’s do everything we can to get these workers the proper health services they need and deserve,” said Berkley.

Top photo: The 40 workers who worked in Tower 2 for the state Department of Taxation and Finance who died on Sept. 11, 2001, were remembered during a ceremony at the department’s Brooklyn office on the 20th anniversary of the attacks.