Trending
You are at:Home»Staff Retirements»Director of Research Don Kelly retires from CSEA 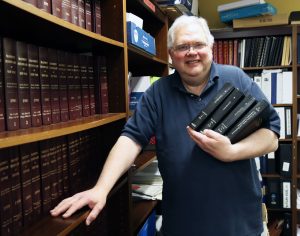 Don Kelly, as recently seen on the job. (Photo by Mark M. Kotzin)

ALBANY — Don Kelly retired as CSEA’s Director of Research at the end of April after spending more than 41 years working for our union.

In March 1981, Don began his career at CSEA as a research analyst after realizing he could not work in the world of banking, where workers had no protection from difficult bosses.

After witnessing a co-worker be bullied by a boss, Don looked for a new job.

“I saw a job in the paper for a research analyst for a labor union and I said ‘Ha! A labor union! Well, there’s someplace I’d like to work because they stand up for people.’” Don said. “Even when I was a kid, I never liked to see a bully taking advantage of someone. I don’t like to see bullies take advantage of people, and that is one of the reasons I joined CSEA.”

After joining CSEA as a research analyst, Don later became the union’s Director of Research.

One of his most notable accomplishments was developing and presenting a workshop on Civil Service Law, which has been for years one of the most well-attended and popular sessions at CSEA events.

“Members look forward to it,” he said. “People are disappointed when it’s not scheduled. They really enjoy learning about that stuff.”

Don has also been involved in negotiating 11 contracts with New York State, negotiated the 1988 – 1991 Unified Court System and Department of Military and Naval Affairs agreements, graduated from the Harvard Trade Union Program in 2005 and helped prepare CSEA’s main argument to fight an attempted change in the New York State pension funding methodology.

Don has also been a driving force for community involvement among CSEA staff. He has been key to organizing staff teams to fundraise and participate in 11 Cystic Fibrosis sports challenges, organizing a 2001 blood drive at the Annual Delegates Meeting in Buffalo to help those injured in the 9/11 attacks, helping organize numerous staff blood drives and serving as chair of the CSEA staff United Way annual pledge drive for 15 years, a role that included coordinating eight CSEA staff coffeehouse events to raise money for the United Way. Don also helped manage a staff basketball league and softball team.

He has twice been recognized by CSEA staff for his accomplishments, receiving both the Doug Lundquist Memorial Award in 2003 and the Kim Hytko Memorial Award in 2018. Each award, given in memory of two beloved CSEA employees who passed away in 1994, is given annually to a deserving staff member who exemplifies the characteristics that made Doug and Kim so beloved and such a vital part of CSEA staff.

“Winning those staff awards was very special,” Don said. “They’re pretty near and dear to my heart.” 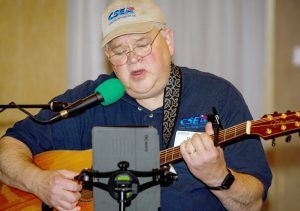 Don also has a strong connection with history and telling stories of people and their struggles through music, especially Irish folk music, which he both performs across the Capital Region and teaches at Hudson Valley Community College in Troy.

“Irish folk music has been very important to me throughout my life and it’s just recently I’ve really honed my craft in performing it. I’m very proud of that,” he said. “There are many songs about the labor movement to tie into CSEA and I love to sing the songs to educate people.”

Don firmly believes that members should take the time to understand our union’s history and the fights that have been fought and won to give them the benefits they have today, as well as how important it is to stick together as a union.

“If you’re a single employee, you’re like a single pencil,” he said. “If I’m management, I can snap that single pencil with one hand. But if you take 10 pencils or 100 pencils, you can’t break that. We’re strong. I look at CSEA like that.”

“A lot of the members don’t realize the history and the struggles that gave them the benefits they have today,” Don said. “There are many that do understand but I wish everyone would be enlightened to the hard work of the members, officers and staff over the years. Look out for each other. Stay united, have each other’s backs. The rate of organizing and unionism is on the rise again, but it’s nowhere near where it needs to be.”

Don, who has served as emcee at numerous CSEA events, said one of his favorite memories from his time with CSEA was serving as the emcee of the CSEA Centennial Celebration at the union’s Annual Delegates Meeting in Albany in 2010. “That was really special, that was in front of 1,200 CSEA leaders and members and it was a lot of fun,” he said.

Stephen Connolly, who had served as a Deputy Director of State Operations, recently stepped into the role of Director of Research.

“I’m proud to say I’m leaving CSEA better than I found it back in 1981 when I started,” Don said. “To me, CSEA is more than just a union. It’s a family, an organization of people who care about each other.”

“For over 40 years, Don has been so much more than just a staff member of CSEA,” said CSEA President Mary E. Sullivan. “He has been a dear friend, and one of our beloved brothers. We will miss him greatly and we wish him the very best in his well-earned and deserved retirement.”