Scott Kelly, second from right, celebrates with his wife and children as his daughter, McKenna Kelly, center, commits to play soccer and basketball at the University of Pittsburgh at Bradford. Photo courtesy of Scott Kelly.
Long Island Region

By Editorial Staff on May 31, 2022 0 Comments
Scott Kelly, second from right, celebrates with his wife and children as his daughter, McKenna Kelly, center, commits to play soccer and basketball at the University of Pittsburgh at Bradford. Photo courtesy of Scott Kelly.

WARSAW — Scott Kelly is a proud father of three children who are all busy with sports.
His daughter just committed to play soccer and basketball at University of Pittsburgh at Bradford, and his two sons are each juggling at least two sports each.

So, Kelly, a former Town of Warsaw Police Unit President, and his wife are busy, to say the least.

When Kelly is not on the job as a school resource officer, he’s running his children all around the state and across the Northeast to watch them play their respective sports. So, a predictable schedule is crucial to maintaining a strong relationship with his children.

He said thankfully, his CSEA-negotiated contract with the police department has allowed him the structure to attend as many of his kids’ games as possible.

While Kelly’s had union representation for the nearly 25 years he’s been on the force, one thing he didn’t always have was dental and vision coverage.

So, when he became unit president, securing coverage for unit members was a top priority. With the help of CSEA, dental and vision were added to the unit’s benefits package, both for their active years as police officers as well as after retirement.

“At least I can continue [with]dental and vision after I retire because the kids will still be young,” he said.

The maintenance of these benefits after retirement was imperative for Kelly since he’ll be retiring next year and his youngest child is only 13 years old. One son wears contact lenses and with the number of sports his kids collectively play, there’s been mouth injuries from time to time.

“To me, that’s the most important [benefit]through CSEA,” Kelly said.

Kelly said he’s looking forward to having more time to watch his children’s games and to continue his relationship with CSEA after he retires.

LONG BEACH — It was a shocking blow to CSEA City of Long Beach Unit Sanitation Worker George Decatrel when the city laid him off during the height of the pandemic.

After all, his daughter, then just 5 years old, was under his insurance, and she had access to the superior health coverage that was negotiated for Decatrel in his union contract.

CSEA fought to get Decatrel reinstated. He no longer worries about his insurance or the time off he needs to look after his daughter.

“When there is a school break, I am able to take time off to be with my daughter,” said Decatrel. “The schedule that my supervisors [also CSEA members]worked out for me is really helpful because I’m out of work early enough to pick my daughter up from school at the end of the day.”

As for Decatrel’s union brothers and sisters, they never fail to rally behind him when he has a parental emergency.

Decatrel immediately informed his colleagues about the issue. They agreed try to finish their sanitation route more quickly so that he could go help his daughter. 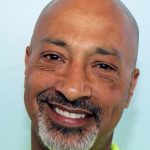 A supervisor, also a CSEA member, happened to pull up behind the truck. When Decatrel told him the situation at hand, the supervisor said that he would be waiting for Decatrel at the end of his route.

“As soon as I was done with my work, I jumped in my supervisor’s truck and he took me directly to my car,” said Decatrel. “I was at my daughter’s school with a change of clothes by lunchtime. Everyone did what they could to help me get to my daughter as soon as possible. It’s really emotional for me. My daughter and I are very close.”

The familial atmosphere and negotiated benefits make being a CSEA member an enviable position.
“I am so proud to be a member of CSEA for all the ways they have helped me and supported me in the time that I’ve worked in Long Beach,” said Decatrel.