Barbara Reeves is acknowledged by officers and delegates at her final ADM in 2007, several months before she retired.
Statewide

By Janice Gavin on June 30, 2022 0 Comments
Barbara Reeves is acknowledged by officers and delegates at her final ADM in 2007, several months before she retired.

A CSEA activist for nearly 35 years, Barbara was elected as CSEA’s Statewide Secretary in 1994, and served in that role until she retired in 2008. 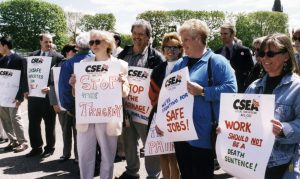 “Barbara was always a strong leader and a powerful force for our members,” CSEA President Mary E. Sullivan said. “For as long as I knew her, she never wavered in her commitment to CSEA and her determination to improve working conditions for all of us, especially working women. She was instrumental in the formation of the Statewide Women’s Committee. Her tireless advocacy on behalf of women’s issues was recognized in 1990 when she was named a recipient of the Irene Carr Leadership Award. She was truly an amazing woman and a dear friend and I will miss her incredibly. Rest in Peace, my Union sister.”

Barbara was a founding member of the Mohawk Valley Psychiatric Center Local in Utica and served in local leadership posts. She served as a mental hygiene representative on the CSEA Board of Directors as well as on numerous committees, most notably as a member of CSEA’s Women’s Committee.

Early in her career, Barbara was involved in the civil rights movement, paving the way for her CSEA activism. “I think the principles of social justice and the principles of this union are really the same,” she said in 1994. “I just get so much satisfaction from working with people; that’s the only reward I’m interested in.”

Like one of her mentors, former CSEA Statewide Secretary Irene Carr, Barbara spent her career fighting for improvements in work and family issues that traditionally concern working women. Barbara served on our union’s first Women’s Committee during the late 1970s and had lobbied for the committee to become one of our union’s standing committees. As Statewide Secretary, Barbara continued to work with the Standing Women’s Committee as its officer liaison.

In what she once called her “proudest achievement,” Barbara received our union’s prestigious Irene Carr Leadership Award in 1990 for her advocacy for work and family issues.

Barbara was also a safety and health activist who chaired our union’s first Statewide Occupational Safety and Health Committee. 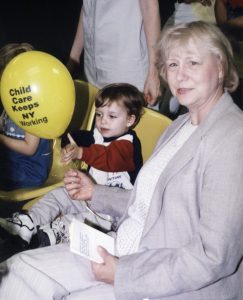 Barbara Reeves was a leading advocate for child care programs, as well as health and wellness education and sexual harassment awareness.

Barbara worked to advance health and wellness programs for CSEA members, advocating for child care, sexual harassment training, worksite mammography and office ergonomics. She also served as the Employee Assistance Program coordinator at her workplace for 15 years. As Statewide Secretary, Barbara had served on the labor-management committee for the state Family Benefits Program.

While Barbara was not afraid to speak up and make her point as a union leader, she was known for her gracious manner, frequent acknowledgement of others’ contributions and ability to listen to others.

Barbara also trained thousands of union officers and activists in their responsibilities as union secretaries.

“My greatest satisfaction comes from having a positive impact on the lives of CSEA members and their families,” Barbara said shortly before she retired. “I cherish the opportunity I’ve been giving to make a difference in the lives of members, both on and off the job.”

In later years, Barbara had lived in Florida and was a member of CSEA Florida State Retirees West Local 950.