MANHATTAN — At a time when books are being banned and curriculums are being censored, Roslyn Taylor wants people to know the truth about Black history.

“We need to know our history and culture and we need to teach it to our children,” said Taylor, President of CSEA’s New York Metropolitan Retirees Local. “It’s important to know so we can understand the struggles and disparities we continue to face in areas like the workplace, housing, health and education.”

While taking a self-guided tour of the National African Burial Ground Monument in Lower Manhattan recently, just a few days before the observance of Juneteenth, Taylor highlighted the important contributions made by her ancestors, including the construction of Wall Street and Broadway. 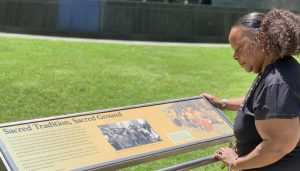 Taylor reads one of the displays at the
National African Burial Ground.

“If it weren’t for our ancestors, we wouldn’t be enjoying many of the things we enjoy today,” said Taylor, who, before retiring, had worked as a mental health therapy aide at Bronx Psychiatric Center for 31 years. “They built this country.”

Although slaves were emancipated in 1863, enslaved people in Texas and many other states continued to toil for an additional two years due to the fact that that slave owners resisted the order and hid the news from enslaved people. On June 19, 1865, federal troops arrived in Texas to ensure that all people were freed from slavery.

Taylor fears that not enough people are aware of their history. That is why she planned for union members an educational weekend getaway to the National African American Museum in Washington, D.C. in September.

“It’s important to know this history so it won’t be repeated,” said Taylor. “If certain people had their way, they would bring us back to those days when we were enslaved.”

The official recognition of Juneteenth as a state and federal holiday has certainly opened the door to greater conversations about this country’s troubled past, even as some people continue to push back on teaching the truth about the origins of the United States.

“America today is ashamed of what they did to Black people,” said Taylor. “[Some people] don’t want their kids to know about it.”

In some states, legislatures have banned books by Black authors or have outlawed so-called “critical race theory,” which is essentially the real, yet painful, history most history books in the past have failed to provide.

Taylor hopes people and families, of every race and ethnicity, will commemorate Juneteenth by reading about Black history, watching documentaries and visiting museums that highlight Black history.

“We need to speak with our people about Juneteenth because too many people still do not know its significance,” said Taylor. “We need to celebrate our ancestors.”

As unionists, Taylor insisted, it’s profoundly important for all workers to know and study Black history.

“We are union activists and there are many parallels between the struggle of enslaved people and many of those leaders who fought and died battling Jim Crow laws, segregation and systemic racism,” Taylor said. “Black leaders and activists like many labor leaders and activists, dedicated their lives in the struggle for human rights, dignity and respect. We need to understand that we are still in the fight.”

Learn more about the history of Juneteenth and how to celebrate it at www.juneteenth.com.