Trending
You are at:Home»Awards»Rohl honored with Webster Memorial Award 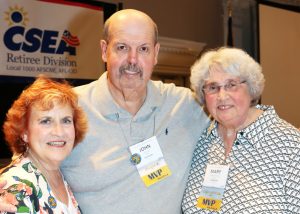 ALBANY — Capital District Retirees Local President Jack Rohl retired from the Albany Housing Authority in 2015, but he is still busy fighting on behalf of working people and retirees.

For his efforts to help CSEA members, Rohl was recently honored with our union’s prestigious Donald Webster Memorial Mission Achievement Award, which is awarded to a CSEA Retiree activist, at our union’s recent Retiree Delegates Meeting.

“I was truly honored to have received the Donald Webster Memorial Mission Achievement Award and humbled that I could be noticed for what I have tried to accomplish for our union and our communities,” said Rohl. “I’ve always said this is not about me. I think about other people and if I can do my best for them, I try [to do so].”

Rohl, who served on our union’s PEOPLE and Captial Region Political Action Committees, has long been involved in efforts to elect candidates who stand with CSEA.

“Jack helped a lot to elect politicians who are committed to supporting CSEA,” said CSEA President Mary E. Sullivan. “Some members may not understand why we get involved in politics, but Jack knows that it doesn’t matter what party you are, but what side you are on.”

“I was taught how true politicians treat people and help them in times of need,” said Rohl.

Those early lessons in activism helped Rohl as he began his union career with the Albany Housing Authority Unit in the late 1970s. He went on to serve in numerous roles in our union, including as Albany County Local President from 1984 until retiring. He also served as the Capital Region’s 3rd Vice President, on our union’s Board of Directors and as Local Government Division Chair.

He helped lead the Albany County Local’s efforts to get involved in local government races, and worked on efforts to halt privatization and furloughs.

“This is why [political action]is so important because you get to elect your bosses,” said Rohl. “Once we made endorsements, we followed up with phone banks, literature drops and helping [candidates]get elected. We also worked with them as [elected officials].”

In 2017, Rohl was elected President of CSEA’s Capital District Retirees Local, and served as secretary of our union’s Retiree Executive Committee from 2017-21.

He often reminds members that the contracts CSEA members have today, which include fair pay, good benefits and retirement security, weren’t always there.

“As retirees, political action is most important today because [many pieces of legislation that are]passed affects retirees,” said Rohl. “We all forget how this state and union were built on the backs of grandparents and parents, who sacrificed dearly to give us these benefits, pensions and health insurance we enjoy today. Our retirees [have fought for these contracts], earned them and set the standard. This is one reason retirees should be treated with dignity, respect, and never be taken advantage of and never be forgotten.”

Rohl notes that his family’s support was key in his ability to be active.

“[My family has] stood by me in good and bad times,” said Rohl. “We could never succeed in life without the support from family, friends and our union family. I hope I have accomplished making people’s lives better.”