Trending
You are at:Home»Awards»CSEA Retiree activist Bess Watts honored as a Woman of Distinction 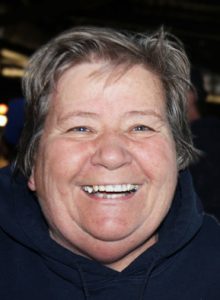 ROCHESTER — September’s Rochester Labor Council meeting was one for the books.

Watts, who had served as our union’s Monroe County Local President and numerous other CSEA and labor leadership roles before retiring, has been a leader in advancing LGBTQ+ rights and intersecting them with statewide labor movement.

Watts stood alongside her wife as CSEA and other labor leaders praised her accomplishments over her 23 years as a CSEA member.

“From her leadership as CSEA’s Monroe County President for years to her engagement on both the union’s Political Action and LGBTQ+ committees, Bess has made an impact on the livelihoods of so many of her friends, colleagues and neighbors,” said CSEA Western Region 1st Vice President Renee Jackson. “Even as a retiree, she’s remained dedicated to the members of our union.”

In addition to her involvement with CSEA, Watts is also president of Pride at Work’s Rochester Finger Lakes Chapter. Pride at Work is an AFL-CIO constituency group that represents LGBTQ+ union members and their allies, including through organizing mutual support between the labor movement and the LGBTQ+ community and advancing social and economic justice.

Pride at Work has 28 chapters across the country, including four in New York.

“[Watts] has set a precedent of inclusivity and equality within CSEA and that legacy will remain preserved within this union going forward,” said Jackson.