The U.S. Supreme Court case Janus v. AFSCME Council 31 is a blatant attack on unions that is putting your retirement security at risk.

The court recently heard oral arguments for Janus and is expected to decide that collecting agency or fair share fees is unconstitutional.

Gov. Andrew Cuomo recently signed legislation that amends the Taylor Law to limit our duty of fair representation. Specifically, this means that public employee unions will not have to provide representation to non-members in any disciplinary cases as well as any legal, economic, or job related services beyond those provided in the collective bargaining agreement. However, we will still have to represent non-members in contract matters.

Why this matters to you
As a retiree, you may be asking, ‘what does this have to do with me?’
If enough of our members stop paying dues, our union can be decertified at workplaces and put contracts in jeopardy.

This means that contracts would go away and workers could lose fair wages, health insurance, paid time off, seniority rights and other protections. Also at stake is retirement security.

Our union has the resources to stand with you and work toward what’s right, including through political action and the courts. You have earned your retirement security and we are committed to protecting you.

Strong unions like ours have been able to stop such proposals, but without a strong union, we may lack the resources to safeguard your health care and pensions.

Our message is clear — we are working to unrig the system that has allowed billionaires to keep getting richer on the backs of working people.

“We are here to tell [anti-labor groups] that they will NOT succeed, that we are not going anywhere,” said CSEA Executive Vice President Mary E. Sullivan. “The road ahead will not be easy, but no matter the obstacles ahead, we cannot and will not abandon our heritage and dishonor those who fought and died so we have this right to be union.”

Gov. Andrew Cuomo and State Comptroller Thomas DiNapoli were among the elected officials who spoke at the New York City rally.

“When you attack labor, you attack New York, a state that is proud to have the highest union membership in the United States of America!” Cuomo said. “I believe we need more unions today, not fewer. There are workers today who are being victimized and abused and need the strength and solidarity of the labor movement more than ever. If we stand together, nobody can beat us.” 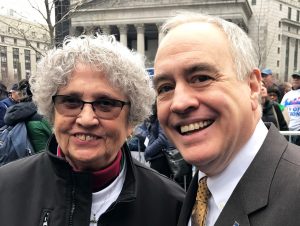 DiNapoli, whose mother was a CSEA Nassau County Local member and whose father was also a union member, spoke about how unions ensured his family’s economic security.