Trending
You are at:Home»Attacks on Labor»Supreme Court caved to CEOs, wealthy in Janus decision; our union will stay strong

Specifically, the court, in a 5-4 decision handed down on June 27, agreed with the plaintiff’s argument that requiring public-sector workers who opt not to join a union to pay fair-share fees violates the First Amendment.

The plaintiff, Illinois state employee Mark Janus, objected to paying the fees on the grounds that he disagrees with unions. However, the case really isn’t about Janus, but about the well-funded, anti-union groups who are attacking working people and the rights and benefits we have fought for and won.

“It’s outrageous that the Supreme Court caved to greedy corporate CEOs and the wealthy instead of supporting the rights of hardworking Americans,” CSEA President Danny Donohue said. “Let me be clear. This case wasn’t about fairness or even free speech. It was just another scheme for the rich to get richer by destroying unions and silencing working people.”

Here’s how you can keep our union strong: stick with our union.
Members have already been contacted by anti-union forces urging them to quit. Don’t let them trick you into giving up your rights for a few more dollars.

“I can tell you right now it’s not going to work,” CSEA President Danny Donohue said. ”Our members won’t be fooled into giving up everything unions have fought so hard for.”

If you continue to be a full, dues-paying member, you not only protect yourself, but help us protect working people. See Page 5 or visit our CSEA Never Quit Toolkit at cseany.org/neverquit.

“Workers in New York, the most unionized state in the country, know the value strong unions provide workers, families and communities,” Donohue said. “Our members will stick with our union because unions help workers get better wages and health benefits, improve workplace safety, and protect their pensions. CSEA has been around for 108 years and we’re not going anywhere. Stay Union. Stay Strong!” 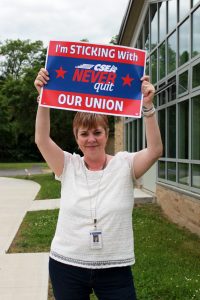 “We’ve worked to build a strong union here
and we’re not letting anything change that.
We communicate with our members and make
sure they’re aware of all the different benefits
available to them through our union. We
just ratified a new contract with unanimous
approval. We had our members’ backing and
support throughout negotiations. They really
understood the value of our contract.”