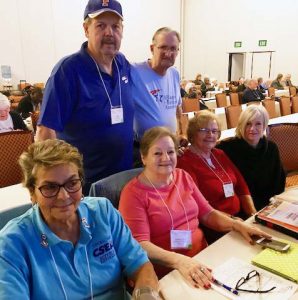 The proposals were approved at our 108th Annual Delegates Meeting.

Previously, CSEA Retiree membership was only open to those who were CSEA members during their employment, or who received retirement benefits through the New York State and Local Employees Retirement System and Firemen’s Retirement System. This eligibility included spouses and domestic partners who receive state pension benefits from deceased CSEA members, as well as retired CSEA staff members who are former public employees and receive state pension benefits.

“In CSEA, we really stress the value of our union family in everything that we do,” said CSEA President Danny Donohue. “Our retirees’ spouses and domestic partners are members of our personal families and often share our concerns as union members. Our retired staff members have spent years fighting for working people. Allowing them to join our Retiree Division is a natural fit.”

Spouses, domestic partners play valuable role
Previously spouses and domestic partners who were never CSEA members or eligible public employees — and continue to live with one receiving state pension benefits — were unable to join our Retiree Division as members.

Despite being unable to join as full members, spouses, domestic partners and retired staff have long played a crucial role in our union family.

Many CSEA Retiree members attend local membership meetings and events with their spouses or domestic partners.

In addition to attending the meetings, many spouses and partners play active roles, including participating in discussions on the issues and volunteering their services.

“These people are actively involved and they are well aware of the issues that our retiree members face because they are usually facing these issues along with their [member]spouses and partners,” CSEA Retiree

Executive Committee Chair Millie Lucas said. “We look forward to having them as full members because they are already playing a major role in helping us stay strong.”

Former staff provide expertise
While retired CSEA staff who were previously public employees and receive pension benefits were already allowed to join our Retiree Division, membership was not open to retired employees who have never been CSEA members or eligible public employees.

Under the proposal, all retired employees will now be able to join.

“Many retired staff have experience and expertise on issues that are important to our retiree members, and their knowledge and skills will help advance what our members can accomplish,” Lucas said. “These former staff members are also loyal members of our CSEA family and we welcome them back.”

To get a CSEA Retiree Membership Application, visit cseany.org/csea-retiree-members to download one or call CSEA Headquarters at (800) 342-4146.