Trending
You are at:Home»Awards»Reinhart honored for unionism 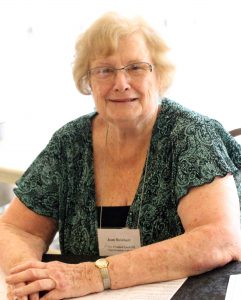 For her ongoing union work, Reinhart was recently honored by the Florida Alliance for Retired Americans (FLARA) with its prestigious President’s Lifetime Achievement Award. She was presented with the honor during FLARA’s recent annual convention.

FLARA is an organization of retired labor union members that works for legislation and policies that are in the best interest of current and future retirees in Florida, including protecting Social Security and Medicare and supporting political candidates who fight for retirees. CSEA’s three Florida retiree locals play an active role in FLARA.

“I was incredibly honored to receive the Lifetime Achievement Award from FLARA, an organization dear to my heart especially as I got older, since [one of FLARA’s]main concerns is the longevity of Social Security and Medicare,” Reinhart said. “As a third-generation union member, I know that working together, we do so much more than we can on our own. I am happy that I have the opportunity to work on issues that are important to me.”

Originally from Wantagh, Nassau County, Reinhart joined CSEA when she began working at Nassau University Medical Center as the assistant to the hospital’s chief of Pathology.

After retiring from the hospital in 1996, Reinhart moved to northern Florida and soon got involved in numerous community and church activities.

In 2003, CSEA formed a new local for retirees living in northern Florida.
“There were enough [CSEA retiree members] in the northern part of Florida that [our union]asked for a few volunteers who wanted to be officers to start out this new union,” Reinhart said. “I volunteered and became the 1st Vice President of Local 952.”

Although she was already retired, Reinhart benefitted from mentoring on union leadership and getting involved in politics, eventually working with FLARA and other Florida retiree groups.

Both within these groups and independently, Reinhart works to get union-friendly candidates elected in various state and local political races. In addition to these activities, Reinhart is also active with the League of Women Voters and the Women’s March.

“Under the leadership and mentoring of [former Local 952 President]Sarah Jones, I learned a lot about unions, what unions can do for you and what you can do as a group as a union member,” Reinhart said. “I wanted to become a lot more active in politics. Through our union, I listened, learned and through [Jones’] mentoring, I became so much better informed.”

She is using this knowledge to fight to protect Social Security and Medicare from politicians who support gutting the federal programs.

“Social Security and Medicare are two wonderful social programs that our country initiated to help older people,” Reinhart said “There are many seniors whose lives and well-being depend on Social Security.

Medicare has taken the worry out of so many seniors who have health issues and when faced with the astronomical costs of health care, Medicare was their lifesaver. I’m a recipient of both of those programs and I will do my darnedest to fight to see that they’re both around not only for my children, but my grandchildren.”

The Florida Alliance for Retired Americans (FLARA) is an organization of retired labor union members that works for legislation and policies that are in the best interest of current and future retirees in Florida, including protecting Social Security and Medicare and supporting political candidates who fight for retirees.

One of the ways that FLARA has worked to make a difference in Florida, a state that had long had right-to-work laws and low unionization rates, is through member Visit Teams.

The FLARA Visit Teams are tasked with regularly visiting state legislators and Congressional representatives in their home districts to discuss issues that are important to retirees. The visits help hold elected leaders accountable, particularly as Florida legislators are typically in session for only about 60 days per year.

“We have to show up [at the district offices]because if we’re not there, [elected leaders]will think they’re doing the right thing,” FLARA President Bill Sauers said. “Silence means consent.”

FLARA is also playing a role in efforts to oppose energy deregulation in Florida, a move that many people believe will lead to increased energy costs and less reliable service.

CSEA’s three Florida retiree locals play an active role in FLARA, which is a powerful voice for retired and working people in Florida.