Trending
You are at:Home»Retiree News»Retirees have a major impact on our state

Retirees have a major impact on our state 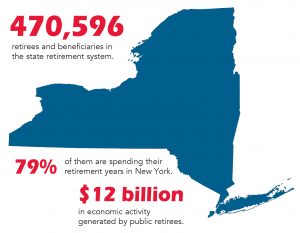 A recent New York State and Local Retirement System (NYSLRS) report confirms what we already know well — that public retirees play a major role in our state and local economies.

The report notes that in 2017, the latest year statistics were available, public retirees generated $12 billion in economic activity across the state.

Of the 470,596 retirees and beneficiaries in the state retirement system, 79 percent are spending their retirement years in New York.

Our state’s public retirees have defined-benefit (guaranteed) pensions, a major factor in a secure, dignified retirement.

Nearly a half million retirees and beneficiaries in our state’s retirement system have stronger retirement benefits because of strong unions that fight for pensions.

Strong unions don’t only benefit members and their families, but strengthen all of our communities.
Here is some more evidence of how public retirees are making a positive difference for all New Yorkers:

In 2017, retirees and beneficiaries paid $1.9 billion in property taxes, as well as $650 million in state and local taxes. This tax revenue helps fund the essential public services that CSEA members provide in every community in New York, every day.

In addition to staying in New York, the study shows that public retirees also spend money in local businesses. According to the study, public retirees are responsible for about 73,000 jobs across the state, including health care, restaurants and entertainment.

We all know that a rising tide lifts all boats and retirees are no exception. When we fight for retirement security, not only for current retirees, but for future retirees, we are fighting to ensure that our state and communities remain strong.

Our working brothers and sisters are facing challenges from anti-labor groups that claim that our members would have ‘freedom’ if they didn’t belong to a union.

Our pensions, Social Security and health care, however, give us the security and freedom to pursue our interests after retirement.

To see a breakdown of retirees’ financial impact on your region, visit tinyurl.com/NYretireescontribute.