Trending
You are at:Home»Organizing»Hundreds of new workers join CSEA

One year after Janus, we are union strong

One year after the U.S. Supreme Court handed down its Janus v. AFSCME Council 31 opinion, an interesting pattern has emerged: non-union workers are seeking to organize into union.

Since May, CSEA has welcomed hundreds of new members into our union family, most working at previously unrepresented worksites.

While these efforts may seem simple, organizing workers truly takes teamwork.
With management being savvy as ever and union-busting law firms on the employ, workers who want to be part of our union need a strong support network that includes existing CSEA members and leaders working throughout months-long campaigns to be successful.

These new members received this strong support with expert CSEA Organizing Department staff, elected union leaders and CSEA members all rallying around them to help.

In the Capital Region, 70 employees at the Sodexo Food Service Group at the Schenectady City School District overwhelmingly voted to join CSEA in a National Labor Relations Board (NLRB)-run election in early May. Employees stayed strong through the seven-month long campaign and they are eagerly looking forward to their first contract negotiations which are set to begin in the coming months.

The Sodexo win came on the heels of 49 teacher aides who work at Island Trees Union Free School District on Long Island winning their campaign. This group received voluntary recognition from their employer and will join the custodial monitor and clerical units of CSEA at the district. CSEA members from Plainedge School District contributed support, along with Local President Monica Berkowitz, who was integral in the success of this campaign.

Also on Long Island, 124 workers at SCO Family of Services in Sea Cliff, recently overwhelmingly voted to join CSEA. While SCO workers do the same job as state workers at the nearby Sagamore Children’s Psychiatric Center, they are paid far less and have fewer benefits than CSEA-represented state workers.

Despite an aggressive anti-union campaign by management, workers stayed strong through some tough moments due to support from both from public and private CSEA-represented direct care members. 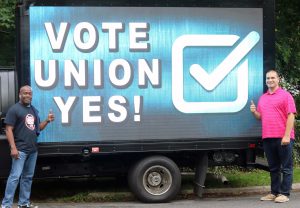 On the day of the SCO vote, the CSEA Nassau County Local, led by Local President Jerry Laricchiuta, donated its electronic billboard truck to provide encouragement as workers entered the campus to vote. CSEA Town of Oyster Bay Local President Jarvis “Tim” Brown and the local’s Executive Board also provided crucial support over the length of the campaign, including a meeting location, administrative assistance, guidance and leadership training.

In the Central Region, more than 100 workers at Massena Rehabilitation and Nursing Center, including those employed in nursing, housekeeping and dietary titles, overwhelmingly opted to form a union with CSEA. This is the third private sector nursing home successfully organized under this owner. 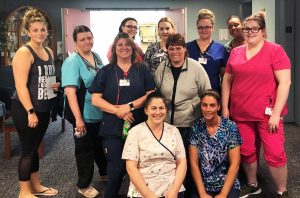 The campaign was successful thanks to strong efforts of the CSEA Organizing Department, union staff and CSEA members, including Massena Memorial Hospital Local President Sue Mackey. The workers expect negotiations for their first contract to begin very soon.

Congratulations not only to all of the workers, who stood strong, but also all of the elected leadership, members and staff who helped make this happen for hundreds of working families who now can look forward to a better future.