Trending
You are at:Home»2020 Census»Be Counted! 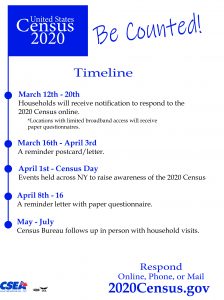 CSEA is making it a top priority to make sure our union brothers and sisters are counted in the 2020 U.S. Census.

Over the past several months, our members have been spreading the word among CSEA members and their communities about the importance of being counted in the
census, as well as facts about the count.

“Getting a full turnout for the census is our union’s next big fight,” said CSEA President Mary E. Sullivan. “Just like we pushed to make sure our members fought back against the constitutional convention which threatened to diminish our pensions, we are pushing to make sure we get an accurate count which funds our governments, and therefore our jobs. It’s really that important.”

Why we all must be counted
The census determines how more than $675 billion in funding for federal, state and local government programs is distributed, including funding for vital public services that CSEA members perform. More than a third of the New York State Budget stems from federal funding that is determined by the census count.

Hard to count populations
In 2010, only 69 percent of New Yorkers were counted in that year’s census, which cost our state public funding of $2,000 per person, every year. According to the U.S. Census Bureau, New York was one of the bottom 13 states as far as response rates. The average state participation rate was 74 percent.

One factor in the response rate is what are considered Hard to Count populations, including those that have historically been undercounted. These areas include urban and rural areas; areas with a high number of renters, including college neighborhoods; areas with immigrants who may have language barriers and families with children under age 5.

Some facts about responding
In the census, everyone is counted, no matter your citizenship status or living situation. The U.S. Census Bureau is bound by law to protect your answers and keep them confidential. Every bureau employee must take an oath to protect your information for life, and they cannot release information about you, your home or your business to anyone, including law enforcement agencies.

The Census Bureau also uses secure technology and strict data protection practices to keep you safe, but there are also potential scams to watch out for. Here’s a few things you should know:
• The census will ask you your name, age, gender and ethnic/racial identification; how many people live in your household, whether someone is temporarily staying with you and whether your home is owned or rented.
• The census will NOT ask you for your Social Security number, your bank and credit card information, for donations, your political identification or citizenship status.
• If a census taker visits your home, check for a valid ID badge that includes their photograph, a Department of Commerce watermark and an expiration date. If you suspect fraud, call the U.S. Census Bureau at (800) 923-8282.

You can complete the census online, by mail or over the phone. Learn more about the census at cseany.org/census.

Be counted for a chance to win an iPad!
To help raise awareness of the importance of responding to the 2020 Census, CSEA is giving away six Apple iPads!

Beginning April 1, we invite CSEA members and Retiree Division members who have completed their census form to visit cseany.org/census to enter for a chance to win a new Apple iPad! Six winners (one from each CSEA region) will be drawn after the census officially concludes on July 31.

To be eligible to win, you must be a CSEA member or Retiree Division member. Further details and an entry form will be available by visiting cseany.org/census.