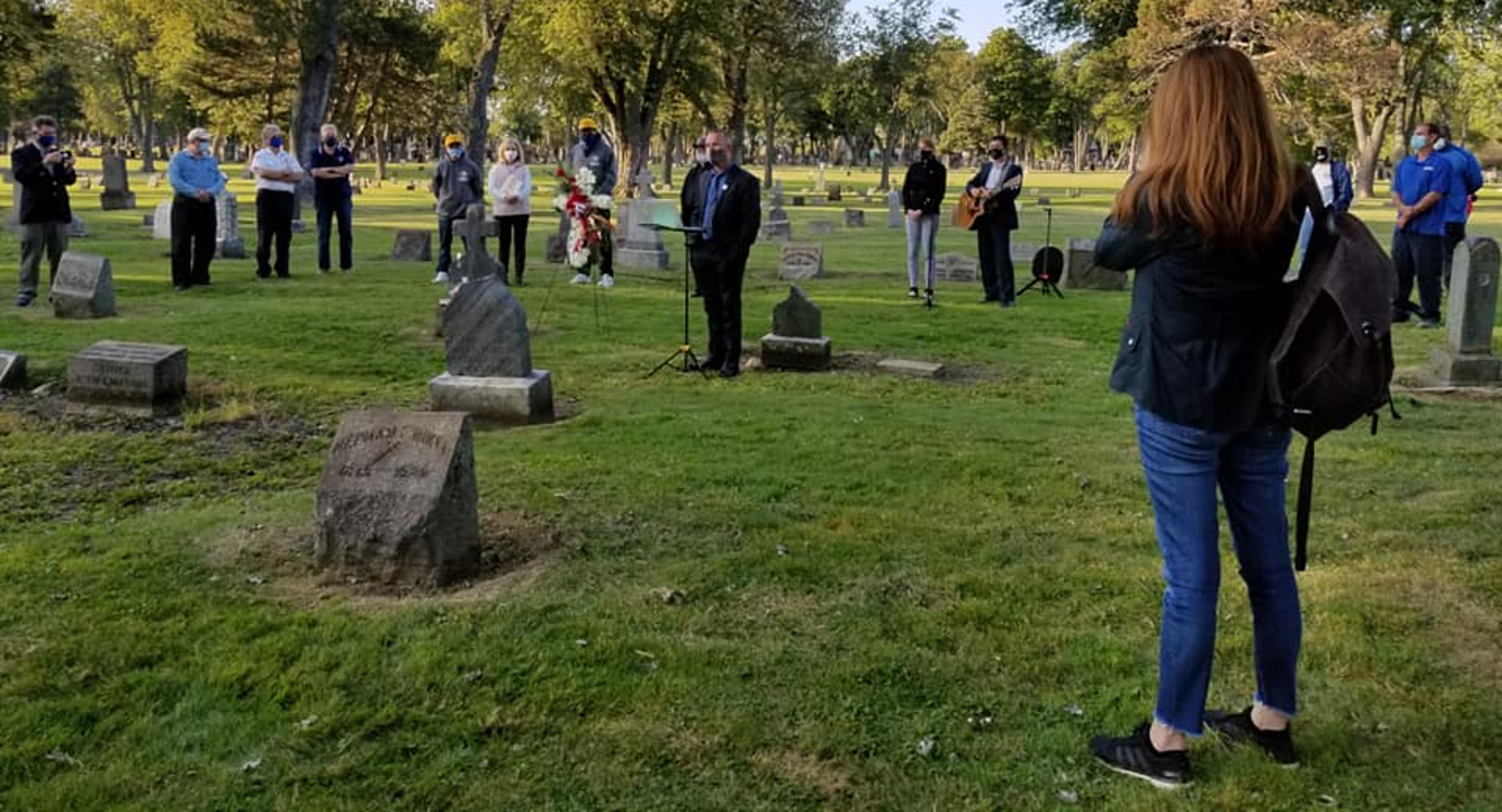 Lackawanna – In 2019, Buffalo’s labor community commemorated the 100-year anniversary of the killing of Casimer Mazurek, a decorated World War I veteran who was shot on the picket line by Lackawanna Steel Company police on September 23, 1919.

For many years, Casimer Mazurek was just a forgotten Western New York footnote in labor history until some concerned labor activists and educators dug a little deeper into his story.

On September 21, 2020, the local labor community joined together once again to rededicate his gravestone, recently restored by Bob Mahoney of SEIU Local 200 United and by CSEA member Mary Smith-Pim and her family. Smith-Pim, a CSEA union member for the past 20 years, is employed as a Licensed Practical Nurse at the Wyoming County Hospital.

The Great Steel Strike of 1919

The Great Steel Strike of 1919 involved about 350,000 steel workers in mills across the country, including a plant in Lackawanna, NY. The Lackawanna Steel Company later became Bethlehem Steel and employed thousands of workers in Western New York.

Calling for higher wages, shorter hours and better working conditions, about half of the Lackawanna Steel workforce joined the strike. Thousands of steelworkers, many born in Poland and Eastern Europe, walked off the job as part of a national strike. 12-hour shifts and seven-day work weeks were routine at the time.

According to newspaper accounts, one night some 3,000 strikers and family members assembled at the main gate of the plant to protest. As steelworkers who were still working at the plant were leaving, some of the protest strikers reportedly became aggressive. Rocks and bottles were thrown—and fistfights followed.

Without warning, the company’s security force fired more than 50 shotgun blasts into the crowd, which included several women and children who attended the protest. The Lackawanna Police Department was in the midst of the foray trying to restore order, but their commands to the steel plant security guards to cease fire were ignored.

One of those hit by the gunfire was Casimer Mazurek, a 26-year-old decorated Polish American World War I veteran. Mazurek served with the U.S. Army 2nd Division in France for almost two years, being wounded in the Battle of Champagne. He had been working at the steel plant for approximately two months.

Mazurek was shot in the head. He died in the ambulance on the way to the hospital. His funeral procession down Ridge Road to Holy Cross Cemetery attracted 10,000 mourners, the largest such assembly in Lackawanna history.

Police arrested seven strikers before the situation calmed down that bloody evening, but there remained much unrest in Lackawanna. The community was outraged by the killings, especially the tragedy of a young soldier who had survived the war in Europe only to be shot dead at his workplace back home. 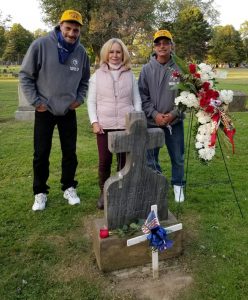 Chris Hawley, a community labor historian whose relentless research sparked the effort to recognize and honor Mazurek’s life, said he was very moved at how local labor advocates rallied around the story.

What it proves, Hawley said at the rededication ceremony, is that “honor and respect for fallen American heroes” remains a galvanizing force, even in a time of fierce national division. He added, it’s important we “chronicle the great struggle and sacrifice made by working people for basic dignity and respect.”

Hawley’s interest in Mazurek’s story brought him to the Holy Cross Cemetery. After a diligent search to locate his gravesite, he finally found the headstone in complete disrepair.

After getting an invitation to visit the site from a friend who worked at the cemetery, Nurse Mary Smith-Pim and her husband Dave, a skilled tradesman, took him up on his offer. After all, it was a day they both had off of work.

When they arrived at the gravesite, they brushed aside debris and weeds with their hands and feet to reveal a flat tombstone that at one point probably stood upright. Now it was barely visible, and needed some loving care to get it back to its orginial state.

“Once I knew the complete story of Mr. Mazurek, it hit home for me. We had to improve the gravesite. My family was of Polish descent, my father was a veteran too and he was a Crane Operator at the steel mill for many years. I also have relatives buried at Holy Cross. There were too many common denominators here for my husband, brother and I not to help restore the memorial. Mr. Mazurek is perhaps one of Buffalo’s greatest symbols of the Labor Movement. It’s something we just had to do.”

While emails, phone calls and texts were shared about next steps, members of the local labor federation were ready to pay the cost. However, Smith-Pim took the lead early on and donated whatever cash was needed out of her own pocket to get the job done.

Mary’s husband said the Holy Cross Cemetery agreed to lay a foundation, and he, Mary and her brother made a concrete base in a local garage. They managed to lift the heavy monument onto the base and then bolted it into place, before they went to work cleaning and sealing the memorial.

When they were finished, the once barely unreadable marker was fully restored.

Smith-Pim also ordered and paid for a plaque to be placed at the foundation of the monument. It reads: “A martyr for working people.” It will be permanently installed in the coming days. 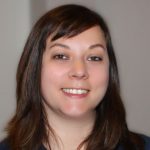 Rachel Casey, a CSEA activist from Erie County who also attended the rededication ceremony with her family, said the event was wonderful and sobering.

Casey said after the event, “Can you imagine being murdered by your employer for fighting against an 84-hour work week and not having a right to union representation?” She added, “Let me read that back to you again– these men worked in the steel mills for 12 hours a day, 7 days a week and wanted to have the right to collectively bargain for better working conditions and wages– some were killed for it. Casimer Mazurek should always be remembered as local working-class hero. The Labor Movement should never forget our heroes.”