Racing inspector Ramona Lawla whistles as a method to extract a urine sample from a racehorse.
Metropolitan Region

Across the board, CSEA members keep horse racing clean

By David Galarza on June 24, 2021 0 Comments
Racing inspector Ramona Lawla whistles as a method to extract a urine sample from a racehorse. 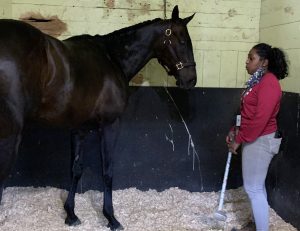 Racing inspector Ramona Lawla whistles as a method to extract a urine sample from a racehorse.

ELMONT — At the racetrack, far from the adoring crowds, a team of diligent horse whistlers keeps gaming clean.

“I never appreciated the saying ‘peeing like a racehorse’ until I came here,” joked Ramona Lawla, a CSEA member and racing inspector at the Belmont Racetrack. “Now, I get it.”

Lawla and other CSEA members employed at the racetrack, operated by the New York State Gaming Commission, are tasked with collecting urine samples from racehorses upon the completion of a race. It’s a risky routine that brings them together with these large animals in a small stall so they can collect the specimen in a jar attached to a long stick.

“It’s important because of the integrity of racing,” said Lawla, who later proudly displayed her personalized stick. “It makes it a fair playing field for all parties involved.”

The racing world has been rocked recently by high-profile allegations of horses receiving illegal substances. While blood tests on horses are administered by veterinarians, urine samples are collected by racing inspectors in state racing facilities like Belmont and Saratoga. 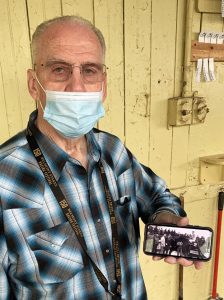 Racing inspector Joe Griffin proudly displays a photo of a racehorse he once owned.

“It can be a dangerous job,” said Joe Griffin, a racing inspector. “A horse can kick you, bite you or push you up against the wall.”

He’s had some close calls, but after a lifetime on the track and in a variety of positions, Griffin has mostly enjoyed the company of co-workers and the horses he interacts with.
In an industry that saw few women, Lawla and Joselin Lopez represent a new trend.

“When I first started working here, I was told that there weren’t a lot of women working at the racing track,” said Lopez. “But it’s a very good thing to have women because it helps to diversify the field. You even see some woman jockeys too, which is very cool because you don’t see too many of them.”

Lopez, who started her career during the Belmont Stakes, gushed about the excitement of that event. While this past year the tracks have been mostly devoid of spectators due to COVID-19 restrictions, she is excited to see fans coming back. 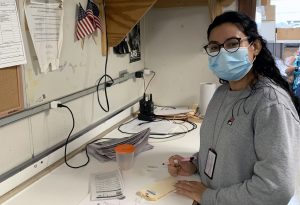 “It’s not the same when you don’t hear the cheering of the crowd,” said Lopez.
Upon the completion of every race, the first place and often the second-place horses are tested after a cooling off period. The race inspectors will then enter the stall with a horse and employ tactics such as whistling to extract a sample. Samples are meticulously labeled, refrigerated and sent to a lab for testing.

“It’s a strange job,” admits Joel Cohen, a racing inspector and longtime horse racing fan who’s held a variety of positions on the track since 1975. Though he describes himself as a “terrible whistler,” he maintains that being alert is paramount.

“You have to be careful,” said Cohen. “You can’t let your guard down even for a minute.”
Griffin, who has owned race horses and been around racetracks across the country, was sent by Western Union to the racetrack with a telegram when he was 16 and he’s never looked back. He’s even worked for celebrities and respected names in the industry, including the late “Jeopardy” host Alex Trebek.

“I work with some really good people,” said Griffin. “I feel lucky.”