Sierra Sheridan, left, was happy to sign up as a union member after Oswego County Unit President Valerie Williams approached her as part of the unit’s non-member outreach program.
Central Region

By Nicholas Newcomb on October 22, 2021 0 Comments
Sierra Sheridan, left, was happy to sign up as a union member after Oswego County Unit President Valerie Williams approached her as part of the unit’s non-member outreach program. 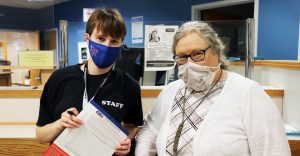 Sierra Sheridan, left, was happy to sign up as a union member after
Oswego County Unit President Valerie Williams approached her as part of
the unit’s non-member outreach program.

MEXICO — When CSEA Oswego County Unit President Valerie Williams was sworn into office, she inherited a non-member outreach project already in the works.

The goal was simple enough — sign up non-members in the bargaining unit as dues-paying CSEA union members.

Williams and the unit’s executive board are succeeding.

The Oswego County Unit was suggested by CSEA staff as a test pilot for the member-driven program due to the unit’s upcoming contract negotiations. Bolstering the unit’s numbers and ensuring more people could vote and have a say in their contract was a key objective.

Williams and the unit team, armed with the technology to document their engagements and sign up members, were given a list of about 50 names listed as non-members in their bargaining unit. The list was divided up and each executive board member got to work.

Making new members
When analyzing the list, it was found that most of the non-members were hired within the last two years, largely during the COVID-19 pandemic.

“They didn’t even go to an orientation,” Williams said. “Their paperwork was done through inter-office mail or when they started, they were working remotely.”

The next challenge was finding them.

“Right off the bat, I knew we would have issues because our unit is so spread out,” Williams said. “We have people that work in 12 or 13 different buildings across the county.”

But between unit officers’ collective efforts, they were able to get in touch with everyone. Much of what came next is commonplace for union leaders.

“We’d say, ‘you showed up on a list of people in our unit as not being a member of our union,’” Williams said. “ [We would say] ‘Did you think you were a member? Is there a reason you’re not a member?’”

Depending on the member’s answer, the conversation went one of a few ways.

A handful of people responded positively and simply asked how much it was going to cost. Some outright did not want to join CSEA for various reasons. Other non-members just said they were waiting for the paperwork or got the paperwork and just didn’t know what it meant. Still more workers said they couldn’t afford more money coming out of their paycheck.

For those who said they couldn’t afford it, Williams plans to follow up with them with some help from CSEA’s Member Benefits Department. After going over member-only benefits that include the AFSCME Free College Program, auto and travel discounts, and exclusive member-only supplemental insurance plans through Pearl Insurance, she hopes non-members will be able to see the value in being a member.

“Then, there were one or two that seemed more resistant that at least got to the point of saying ‘give me more information and I’ll think about it,’” Williams said. “I consider that a win because at least they’ll take the information and that’s your foot in the door.”

Safety first
Not only did the program get new members signed up, but the unit leaders also learned a lot about issues in workplaces, particularly related to workplace safety.

Sierra Sheridan is a part-time cleaner at the Department of Social Services building. She was hired in October 2020 and never had a formal in-person orientation.

When Williams approached her about becoming a member, Sheridan was happy to sign up and shared some of her workplace safety concerns.

When Sheridan gets to work, people are still in the building. After the building closes for the day, she is usually alone.

“Where is the dumpster?” Williams said. “Are there lights in the parking lot? Is the parking lot safe? We’re coming up with a list of items to follow up on for people [to feel safe].”

Growing our union
When the campaign is over, Williams thinks her goal of signing up half of the non-members is achievable.

Williams and the unit board members hope their experiences will help CSEA leaders and staff in their efforts for this kind of member-driven project across the state.

“Most of the [unit]team is used to talking to people, so the idea of having to approach someone is not terrifying,” Williams said. “Some units that might have officers where folks aren’t in touch with the public or their co-workers on a regular basis. That whole notion could be challenging to people.”

But the result of adding new union members, like Sheridan, is worth taking on that challenge.

Many new employees may not realize that becoming a dues-paying union member gives them important and free legal representation to protect their job if they are ever brought up on disciplinary charges.

Under the state’s Taylor Law, workers who are not union members are not entitled to free legal representation. If they have never been members, or drop their union membership, they lose the right to have a union representative and/or attorney provided, when eligible, in disciplinary matters. While we hope that members won’t ever need to rely on that protection, it can and has saved workers’ jobs, and thousands of dollars in attorney and arbitration fees, for workers unfairly targeted by management.