One of the keys to building union power is inclusion. 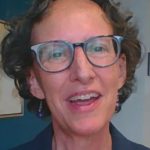 “We know the power of solidarity as union members,” said AFSCME International Secretary- Treasurer Elissa McBride. “Solidarity is about togetherness. Without inclusion, there is no solidarity. Inclusion is part of our AFSCME legacy.”

McBride recounted how CSEA Oneida Educational Employees Local President John Brown discussed inclusion in his local when they were paired together to knock on doors during a member engagement visit.

“As union leaders, we have the responsibility to ensure all voices are heard and included,” McBride said. “[Brown] said whenever he has an opportunity to recruit leaders in his local, he thinks about who is missing from the leadership team. He thinks about whether all departments are represented, so the leadership will reflect the membership.”

McBride said that this idea can easily be applied to workplaces or unions based on demographics, job title or even work shift.

“We are called to think about the missing voices and use our organizing power to ensure that [all union members are]included,” she said.

McBride added that inclusion also stems from sharing information with others and reaching out to co-workers.

“We have our strategy of organizing, which means going out of our way to build connections with potential members,” McBride said. “It means talking to every worker on the shift and building solidarity. It means welcoming new co-workers and inviting them to join our union, maybe the most important job of a workplace leader.”

Across the labor movement, inclusion is also a high priority.

AFL-CIO President Liz Shuler noted that the labor movement is growing with women and people of color at the center, and that unions should take the opportunity to build their strength based on strong public support, including from younger people.

“Are we going to take advantage of the moment to build a bold, dynamic, inclusive labor movement for the future, a movement that’s transparent, accessible and welcoming of young working people, a movement that keeps pace with changes in the economy?” Shuler said.

A. Philip Randolph Institute President Clayola Brown, spoke about how AFL-CIO constituency groups, including her own, have contributed to inclusion — and change.

“The interesting thing about being a leader in the labor movement is that you become a community leader, too,” Brown said. “One thing I’ve learned from the COVID crisis is that the labor movement builds inclusion and coalitions because of the work of the constituency groups, which are the voices of the communities.”

Several speakers stressed the need for strong union solidarity and connections among members amid this era of polarization.

“We have to listen to each other,” Sullivan said. “We have members with so many different opinions, backgrounds, and life experiences. It’s this diversity of thought, of experience, of viewpoints, that allows us to learn from each other. What I’ve found over my years in our union is that if we listen more and talk less, we can better understand each other, and we all become both teachers and students.

If we listen and talk politely about our opinions and why we believe what we believe, I think we can learn from each other, maybe even come to agreement, or at least respectfully agree to disagree. I hope that more of us would make the same effort. It can only help bring us together.”