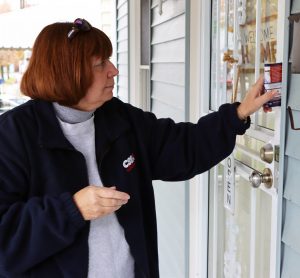 BUFFALO — CSEA Western Region members recently showed their union power in working to get Byron Brown overwhelmingly re-elected as mayor of the City of Buffalo.

The race, which Brown ran as a write-in campaign, was one of CSEA’s highest priority races this year.

CSEA members understand the importance of electing the right candidates to office, and they know one of the most powerful ways to do that is to get out the vote.

Our union spent weeks educating members on the logistics of a write-in campaign, as well as why supporting Brown was important to CSEA members.

During the campaign’s final weekend, CSEA members joined forces with their AFSCME sisters and brothers to distribute literature and support Brown and other candidates throughout CSEA’s Western Region.

“To be involved in the elections is an asset to all members, because we support candidates who support us,” said CSEA Erie County Local President Denise Szymura, who along with other CSEA members turned out on a rainy Saturday morning to meet with Brown. 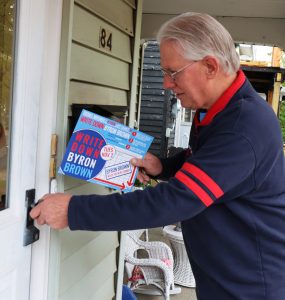 “We support candidates like Mayor Brown who are backed by our union because they have the best interests of the members with them,” said CSEA Erie County Local 1st Vice President Steve Szymura.

During his meeting with CSEA members, Brown showed his support for labor.

“It’s important to know that when you’re in a fight that you have people who have your back,” said Brown. “You all have had my back, you’ve had the back of this community, and together we will move our community forward.”

Union members later took to the streets of Buffalo, where they distributed literature directly to households to remind people to vote. 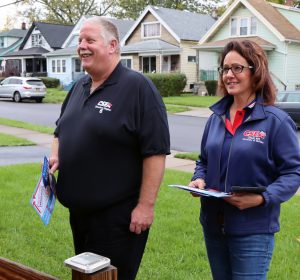 “It’s important to give people one more good reminder before Election Day,” said SUNY at Buffalo Local Treasuer Mona Columbo, who also chairs the Western Region PEOPLE Committee and serves on CSEA’s statewide PEOPLE Committee. “It’s even better if they get out and support our endorsed candidates, but the most important thing is just that they get out and exercise their right to vote.”

Members’ efforts paid off on Election day as Brown defeated his opponent. In his victory speech, Brown specifically thanked organized labor for helping his campaign.

More than 25 unions supported Brown’s campaign. His victory has great significance in the labor movement throughout New York, as Brown’s opponent favors policies that are not in line with the values of CSEA members and their families, including the passage of the New York Health Act, which CSEA strongly opposes.

CSEA will continue to discuss with union members about the true cost of the New York Health Act and continue to push back against opponents.