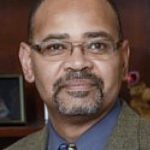 BUFFALO — Very early on in life, former CSEA Western Region activist The Rev. Terrence Melvin knew he was meant to help people in some way.

His career beginnings start in 1980 when he began a job as a cleaner at the West Seneca Developmental Center. Within six months, he moved into a direct care role as a therapy aide.

That was the beginning of Melvin’s rise to become one of the most strong and influential voices for Black workers and other minorities within the labor movement and around the world.

Melvin currently serves as the National President of the Coalition of Black Trade Unionists (CBTU) and the Secretary-Treasurer of the New York State AFL-CIO, among many other roles within the labor movement. He is also an ordained minister.

“If someone told me 25 or 30 years ago that I’d be where I am, having the ability to affect the lives of millions of people across the globe, I would never have believed them,” said Melvin. “By the grace of God, doors have been opened and the ability has been given to me, and I’m just so thankful to have the opportunity to make a difference.”

CSEA activism opens doors
Shortly after becoming a therapy aide, Melvin became a union steward for his local.
With any extra time he had on his hands around his shifts, he quickly found the answer to his question of calling.

“I quickly got hooked,” he said of his work as a steward helping people. “I was young, I’d come in, work in the union office from 7 a.m. to 3 p.m., then go work my shift, then run around after 8 p.m. and put out fires as a steward, because there were only two [stewards].”

Melvin soon became president of his local, a position he would hold for 13 years. During that time, he also served as the Western Region Secretary and the Chair of the Statewide Committee on Constitution and
By-Laws.

In January 1996, Melvin became the Executive Assistant to former CSEA President Danny Donohue. In that capacity, Melvin met former AFSCME Secretary-Treasurer Bill Lucy, who would become a mentor to Melvin.

“I was blessed,” Melvin said. “I had a Bill Lucy and a Danny Donohue to open doors for me.”
Melvin pointed to the need for more equitable opportunities within the labor movement for minorities. “The struggle for minorities is that people are not opening doors the way they should,” he said. 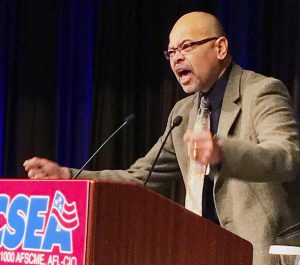 A powerful voice
Melvin was elected NYS AFL-CIO Secretary-Treasurer in 2007, where he has continued to champion the cause of social justice, not only at home but around the world.

He noted that a very small percentage of the population of the entire continent of Africa have been vaccinated against COVID.

“This is self-defeating for rich countries hoarding the vaccine,” Melvin said. “If we don’t clean this up for the whole globe, we’re never going to get past [the pandemic].”

When Lucy, who co-founded CBTU, stepped down as the group’s National President in 2012, Melvin was unanimously elected to succeed him in the role.

The pandemic highlighted the work of people who continued to provide essential services at their workplaces, often at lower pay and at greater risk to their health, including health care workers, direct care workers, sanitation and maintenance workers, transportation workers and grocery workers.

“Now, there’s an awakening about what’s out there,” said Melvin. “Nobody cared if they got a decent wage, retirement or health care, but that’s changed in the face of the pandemic.”

“We tell every country democracy is one man one vote, but then we come back home and we have a segment of our own populace that is saying everybody shouldn’t be allowed to vote,” he said.

Melvin hopes to continue to use his voice and his positions to try to bring together labor into one united movement that can look at people based on who they are from the inside, not what they look like on the outside, and that movement creates equitable opportunities for all.

“We need to allow the ability for members to rise through the ranks, and create a movement that is not only looking out for members but also their extended families, and is helping to create the society we want it to be,” he said.

Melvin also attributes much of his success to having a wonderful and supportive family. “It’s a blessing to have a wife and family that gets it and supports what you do,” he said.

Wherever he goes, and whatever roles he fills, Melvin promises that he will never forget where he came from.

“CSEA is my home,” he said. “I still keep my home base, and I’ll always take care of you!”