CSEA Town of Babylon Unit Treasurer Jennifer Campagnone is shown on the job as an office assistant for the Town of Babylon Department of Downtown Revitalization.
Capital Region

As Mother’s Day approaches, working mom grateful to be union

By Editorial Staff on April 29, 2022 0 Comments
CSEA Town of Babylon Unit Treasurer Jennifer Campagnone is shown on the job as an office assistant for the Town of Babylon Department of Downtown Revitalization. 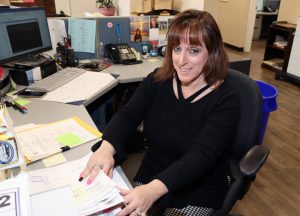 LINDENHURST — Like many women, CSEA Town of Babylon Unit Treasurer Jennifer Campagnone is a working mother. Between work, union and home responsibilities, finding a balance can be challenging.

Good thing Campagnone recognizes the value of union membership. She has been a CSEA member since she started working for the Town of Babylon almost six years ago.

As a union activist, Campagnone knows that a strong union like CSEA negotiates benefits that offer her some relief from the more common stressors that working moms face. Union women also make wages that are far more equal to that of men in similar jobs. Even in 2022, working women make 82 cents for every dollar men make. The gap is even larger for most working women of color.

For working mothers like Campagnone, a union contract is key to sustaining their families.

“My unit negotiated for two hours of personal time that we can use during our workday,” said Campagnone. “The flexibility allows me to leave work so I can take care of things that need to be done for my son. I can use that time if I need to take my son to the dentist, when I can’t get a later appointment or if I have to pick him up from one of his afterschool activities.”

Like many CSEA members, Campagnone has friends who are working mothers, but not union members. She has seen the additional stress these friends are under due to financial strain. These friends — and many working mothers who are non-union — are paying high out-of-pocket prices for expenses that include their children’s health care and orthodontia needs. Campagnone used to be in the same boat.

“Before I became a union member, I was working for a private company and I got nothing,” said Campagnone. “The cost of insurance was really high. That, combined with a low salary, would’ve made it financially impossible to do the things for myself and my family that I can do now in my union position.”

Campagnone noted that joining CSEA has made all the difference in her family.

“Taking that civil service test and becoming a union member are the best decisions that I’ve ever made,” said Campagnone. “I wish I had listened to my mother’s advice and done it all sooner.”

“Working in a school district means being deeply connected to the community. As a married mother to four kids, my job provides security and excellent benefits that allows me to support my family.” 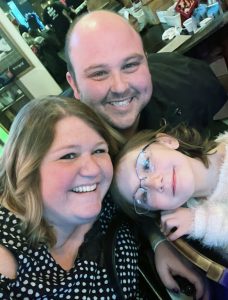 ARCADE — CSEA Village of Arcade Unit Treasurer Gillian Koerner loves her job as court clerk, but there’s one job she most certainly loves even more: motherhood.

“Being a mom is awesome,” she said. “It’s definitely the best job I’ve ever had in my whole life.”

Koerner wasn’t always represented by a union in her position. Previously one of the only non-union village employees, she saw the positive impact of CSEA membership on her colleagues and knew she wanted similar. union-negotiated benefits.

‘I know that if I didn’t have the union, I would have been in for quite the fight,” she said.

Koerner just recently took her daughter on a week-long vacation and said that wouldn’t be possible without the ample paid time off negotiated by CSEA.