Trending
You are at:Home»Political Action» An important primary election slated for summer 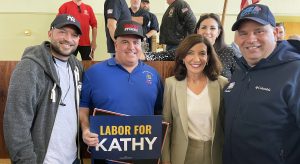 This summer will be an important primary election for New Yorkers. It will feature several gubernatorial candidates, including CSEA endorsed Gov. Kathy Hochul, contending for the Democratic party line, while several more will be vying for the Republican party line.

At the end of April, the New York State Court of Appeals ruled the new congressional and state senate maps drawn by the state legislature were unconstitutional and ordered new maps to be drawn by a neutral expert.

As this edition went to press, a federal court has ruled that the primary for congressional seats and New York State Senate seats will be Aug. 23, 2022, and the primary for Governor, Lieutenant Governor and State Assembly will be June 28. The court has upheld the redrawn Assembly district lines. New congressional lines and New York State Senate lines were released on May 16.

CSEA members will be working hard to help Governor Hochul come out on top on Primary Day.

Since taking office last August as the first woman Governor of New York, Hochul has prioritized unions and CSEA in particular.

“From the day she stepped up to lead, Governor Hochul has recognized the value that public employees bring to all New Yorkers,” said CSEA President Mary E. Sullivan, when announcing CSEA’s endorsement earlier this year. 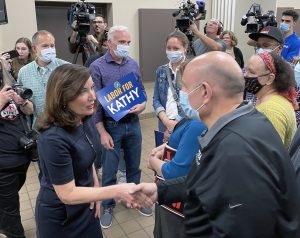 To that point, in short order, Governor Hochul has not only spoken, but has acted by accomplishing the following: 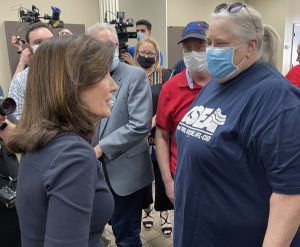 Moreover, Governor Hochul delivered a budget that was very positive for CSEA members. It included positive changes for members in Tiers 5 and 6, bonuses for health care and direct care workers, historic levels of school district funding, new funding for SUNY and unprecedented investments in child care.

“This governor clearly cares about working families and it shows the investments she has made towards the workforce,” said Sullivan. “CSEA looks to build on this solid start with Governor Hochul, but in order for that relationship to continue, we must help her win the upcoming primary and this fall’s general election. We will need CSEA members to show our strength and have our voices heard with our VOTE!”

There are many ways CSEA members can vote during this primary, including by absentee ballot, early voting and in person voting.

CSEA members can always find out the latest elections news by visiting cseany.org/vote.