Editor’s Note: This feature is the first in a series that will highlight CSEA members employed at the New York State Unified Court System. The Work Force’s Jill Asencio recently sat down with Long Island Judiciary Local President Larry Germano to learn more about his work and activism in CSEA.

Jill Asencio (JA): What is your position? 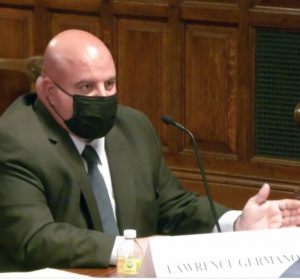 Larry Germano (LG): I am an Associate Attorney at the Mental Hygiene Legal Service (MHLS). MHLS is a New York State agency responsible for representing, advocating and litigating on behalf of individuals receiving services for a mental or developmental disability. It is the oldest and most comprehensive legal advocacy program for individuals with mental disabilities in the United States. MHLS is governed by 22 NYCRR Part 694.

JA: What do you do in that position?

JA: How is this position important to the community you serve?

LG: MHLS is important to the community they serve because we make sure [the community members’]voices are heard and advocate when they cannot advocate for themselves in order to protect their due process rights as well as their liberty interests.

JA: How long have you been working in this position?

LG: I started working for the New York State Unified Court System in MHLS in May 2008.

JA: What is your favorite part of your job?

LG: Interacting with clients and knowing they are represented according to the law is my favorite part of being an attorney for MHLS.

JA: What is rewarding about your role?

LG: I view my role as an honor and a privilege to be able to serve and help my clients in their time of need. Many times, I help people at the worst times of their lives, and it is rewarding to know that I was able to help them.

JA: Tell me a little about yourself and your role in CSEA?

LG: I grew up on Long Island in a union household where union values were instilled in me at a young age. I became involved with CSEA soon after I started with the Court System by contacting then President of [Long Island Judiciary] Local 330, Kevin Ray. He became a mentor to me, and now I have the honor of serving as President of CSEA Local 330.

The members in Local 330 hold various titles in the NYS Unified Court System spanning Nassau and Suffolk counties. Along with [the local’s]Executive Board, we handle a variety of issues affecting the members with CSEA’s Deputy Director of State Operations, Susan Radosh, and a team comprised of the presidents of Judiciary Locals 010, 332, 694, 333, 334, and 335, we are currently in negotiations with the Office of Court Administration to negotiate the Judiciary’s statewide contract. I am also a member of the [CSEA Statewide] Standing Insurance Committee and serve on various [Long Island] Region One committees.

Lastly, I have the privilege of serving on the Executive Board at the Long Island Federation of Labor, which is comprised of 41 different unions and locals from across Long Island. As such, CSEA has the second largest delegation. I am proud to say that we stand in solidarity with the other unions to protect the rights of workers and ensure that the union movement remains strong and continues to make progress.

One issue of concern for many CSEA members is that they are considered at-will employees with no job protection or due process rights. It is a continuing endeavor of mine to do whatever I can to right this wrong.

JA: Tell me why you think it is important to be in CSEA?

LG: First and foremost, when you are talking about CSEA, you’ve got to acknowledge how large we are, and there is strength in numbers.

CSEA provides many benefits to its members. Being part of CSEA enables us to negotiate for higher wages and benefits and improve conditions in the workplace. With CSEA’s member-only benefits, you can save money on insurance, major purchases like appliances and cars, legal services, and home heating oil.

JA: As a court worker, what about CSEA makes it perfect for courts workers?

CSEA has [many resources], including its own Legal Department, Member Benefits Department, Labor Relations Specialists, Legislative & Political Action Department and Communications Department, to ensure our voice is heard and to make sure we have a seat at the table.

LG: I would like to acknowledge the members and their dedication to ensuring the public is served well even under the circumstances of the recent pandemic. They face so many issues, least of which is the short staffing that has been caused by management. The Unified Court System has a severe shortage of several key positions such as Court Officers, Court Reporters, Clerks, Attorneys and more.

Recruitment and retention of new talent in these positions is of paramount concern. In that regard, there is a critical need for further reforms to Tier 6 (like the recent changes, thanks to CSEA) so that individuals will want to take court positions and remain in the Court System. We will continue to pressure for more civil service testing, hiring and reforms to Tier 6.