Trending
You are at:Home»COVID-19»Labor-management discussions lead to snow removal solution

By Jessica Ladlee on December 17, 2020 0 Comments
Richie Wesolowski in his plow truck.

WARWICK — Each year as winter approaches, CSEA members working for the Town of Warwick Department of Public Works gear up for a season of tackling snow and ice on local roads.

They prepare by having plows out to attach to trucks, stocking up on road salt and ensuring they’re rested for possible long days and nights behind the wheel.

This year, there’s been something else workers for workers to consider: Doing winter weather work while preventing the spread of COVID-19.

Having a union has made a difference in addressing that concern. 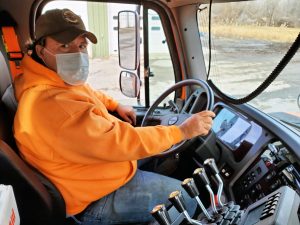 Richie Wesolowski in his plow truck.

“We normally have what we call ‘snow riders’ with us during storms, which gives us a part-time employee as the second rider in the trucks with wing plows,” said Town of Warwick Unit President Richie Wesolowski.

“This year, some workers were uncomfortable with that, since we’ve had a lot of COVID cases in the town.”

Even with workers wearing masks, Wesolowski said, the cramped quarters of a truck combined with long periods of work just didn’t feel safe enough. That’s when he approached Town Supervisor Michael Sweeton to figure out a solution.

It turns out that Sweeton also had the same concerns on his mind.

Sweeton and Wesolowski worked out a temporary sidebar agreement that alleviates many COVID-related safety concerns while allowing the town to retain their right to amend procedures when the pandemic ends.

“We agreed that during the pandemic, we will go without snow riders, but we’d put an end date on it,” said Wesolowski.

During storms, CSEA members operating trucks with wing plows will receive a bonus on top of their regular hourly wage, since those workers will not have a second person assisting with maintenance and other tasks.

“A year ago, we never imagined something like this pandemic would happen,” Wesolowski said. “If the town had run its fleet into the ground, we wouldn’t have had the opportunity to do this.”

The sidebar agreement is proof during this pandemic that having a union in the workplace makes a difference. Having worked in the private sector before coming to work for the Town of Warwick, Wesolowski said he sees how CSEA members have a seat at the table. He also credited the union Labor Relations Specialist, Vanessa Van Alstyne, as a constant resource for workers.

“In non-union worksites, your boss is your boss and there is no leverage,” he said. “Having a union gives us representation and a voice. I’ve worked other places, and so many employees don’t know what their rights are and what’s available to them.”

Wesolowski has developed a strong labor-management relationship with both Sweeton and the town DPW commissioner, which he said has made a difference during the pandemic. When the virus first hit New York, the town agreed to split shifts in the DPW, recognizing that having an entire DPW workforce quarantined would be a major problem.

With the advantage of being able to prepare for this winter, Wesolowski said he feels optimistic about the arrangement.

“It’s best for our workers and their families’ safety and it benefits the town, so we see it as a win-win,” he said.