CICERO — It’s that time of year again when CSEA members, including those employed by the state Department of Transportation (DOT) and local highway departments, will face the yearly challenges of snow and ice season.

But while crews will face normal problems such as staffing issues, fatigue and hazardous weather conditions, they will also be faced with the biggest challenge of our current times — the COVID-19 pandemic.

“We’re used to it because we do it every year. This year is a bit different with the pandemic,” CSEA Black River Valley State Employees Local President Kevin Thompson said. “We’re cleaning trucks on both ends of the shifts and disinfecting them. We’ve kept them clean before, but now we’re going the extra mile.”

And it will be that extra mile that will help keep CSEA members who help maintain roads safe. Shops and garages have also adjusted protocols across the board to help stop the spread of COVID-19. 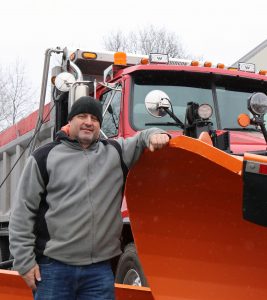 “When we get called in at 2 or 3 o’clock in the morning, we’ll be screened and asked if we have any symptoms,” Town of Cicero Highway Unit President Justin Pettersen said. “If you have any symptoms, you’ll have to stay home, whereas in the past, maybe you just have a little sore throat, you might just stick it out. We’re asking people not to do that this year.”

Along with daily screenings, garages will be doing routine temperature checks, eliminating congregating in large groups and wearing masks and social distancing when possible.

“At the end of the day, we still have to go out as essential workers and plow the roads,” Thompson said.
The biggest problem this year will be just what exactly happens if a garage gets hit with a COVID outbreak and multiple people need to be out on quarantine.

“If one of [the staff members]were to become ill, that takes multiple people out (who might have to quarantine), and that’s the last thing you want this time of year,” Thompson said.

Thompson explained that the state has people from different agencies on standby that could fill in. In some local shops, inexperienced drivers may have to take on a lot more responsibility, which could lead to a number of potential safety issues.

“If one or two [workers]don’t show up because they’re sick, we have one or two spare drivers, and sometimes our rookie drivers might be able to cover their route,” Pettersen said of the local level. “The real challenge will be if we have about five or six people down. Then it comes down to the crew we have left to pick up the roads and those hours get longer.”

Not only do those shifts get longer, plows that would usually clear roads at 4 or 5 a.m. might not be able to get to places until 6 a.m. or later when school buses and commuter traffic is higher, which could lead to traffic accidents and other issues. 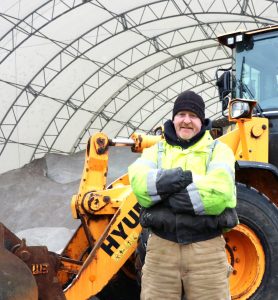 Troy Engebretsen, a machine equipment operator shown here by
a town vehicle, was a union member at his previous job. When he
joined the Cicero Highway Department, Town of Cicero Unit President
Justin Pettersen said he didn’t need to do any convincing to get
Engebretsen to join CSEA.

Slow down & be kind
Thompson said he’s seen the impact of fewer cars on the road due to more people working from home — even in the more rural areas of the North Country where he works — it’s still important to be patient and kind.

When the plows clear the roads, the maximum speed the truck can go on most highways is 35 mph.

“If you go any higher the alarms go off, the GPS is reset and that means you were going too fast,” Thompson said. “(That means) the salt won’t drop on the road; it’ll go right to the side, and that’s wasted money and not doing the road any good.”

It’s been proven that driving 35 mph or slower maximizes the effectiveness of salting the roads.
“The only thing I wish is that people would be considerate enough to slow down,” Thompson said.