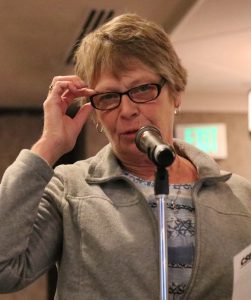 UTICA — “Sheila, we call her Miss CSEA,” former Central Region Judiciary Local President Don Lynskey said of CSEA activist Sheila Sears, who recently retired after many years with the state and our union.

Sears has been a CSEA member since April 1982. Before joining the Unified Court System in 1994, she served as president of the Utica State Employees Local.

Throughout her years of union activism, she has been a reliable fixture for CSEA at the local, region and statewide levels.

Sears, who comes from a union family, wore many hats for CSEA, serving in numerous roles at every level of the union, including as a grievance and discipline representative. On the region level, she held the positions of Central Region 2nd and 3rd Vice President, and chair of the region’s Education Committee. On the statewide level, Sears served as a CSEA delegate, AFSCME delegate and chaired CSEA’s statewide Education Committee, as well as the Judicial Board. She also served as a delegate to the Central New York Labor Council.

“She had her hand in a lot of different pots, but she did them all with perfection,” Lynskey said. “When she had something to do, she did it and did it right.”

Sears said she enjoyed each of the committees she had served on, but there was one she held with high regard. 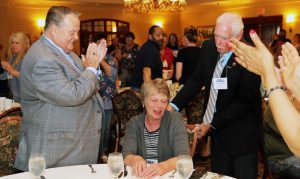 Sheila Sears, seated, is applauded by former CSEA President Danny Donohue and former Statewide Treasurer Bill Walsh upon receiving an award from the Central Region for her activism. (Photo by Mark M. Kotzin)

“I loved my special Judicial Board,” Sears said. “I was a delegate for many years and then Danny (Donohue) appointed me as chair. I’ve really enjoyed working with the people and the Legal staff trying to resolve issues in CSEA.”

Activism with energy
Sears, known as a person of few words, is also known for her energy and passion.

“It’s her passion for the union that drove her to do all these things,” Lynskey said. “That woman has so much energy, she never stops. She could put people half her age to shame.”

At conferences and meetings, Sears always knew everyone and everyone knew her. People all enjoyed her sense of humor too, according to Lynskey.

Sears’ son told her that he was worried about what she would do now that she isn’t working every day, but she doesn’t seem worried about not being busy. 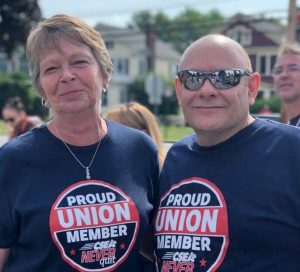 ‘You’re done’
Sears admits she can’t believe how many years have gone by and just how fast they went.

“I have grown a lot, and the union has really made me who I am today,” Sears said.

When looking back on her favorite memories, the conventions and conferences always come to mind — and the dice games played afterwards.

“We would go to our union meetings, we cover 20 counties, so we’d have to go overnight,” Sears said. “And

I’m a killer [at dice]— I do hate to lose. That’s my expression, ‘you’re done.’ When you don’t roll something, that’s what I say and then take the dice.”

And that expression — ‘you’re done’ — has been a running catchphrase in the local. And while she might actually be done, she still has advice for younger activists.

“Get involved,” Sears said.“I know (people) are busy and they’re young and have families, but you’re going to have to get involved to get things. The benefits you get from the union are not a gift, you have to work for them. Help out the officers and get your voice heard on what you’d like to see in the contract instead of just complaining.”