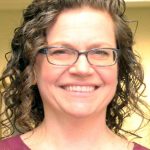 ALBANY — ‘Keep moving forward.’ Those are the words that CSEA Deputy Counsel Leslie Perrin is guided by and mentors by.

Perrin, who has been with the CSEA Legal Department for 20 years, is a strong advocate for women both in our union and in the community.

Her perspective on empowering women began in her formative years. Her parents were both active equal rights and education advocates. As a child, she would ride along as they campaigned for local and state candidates. They even marched on Washington D.C.

“My mother was involved in the Queens Women’s Network — bringing me to their annual luncheons,” Perrin said. “That influenced me to go to an all-women’s college (Smith College, class of 1993). I wanted to be in classrooms where young women weren’t afraid to raise their hands, state their opinions or be smart.”

After moving to Albany and beginning work at CSEA, Perrin learned about volunteering at the Capital Region Women’s Employment and Resource Center (WERC) from CSEA President Mary E. Sullivan.

“We helped women back into the workforce after taking time off to raise children or care for family, or women who are ‘underemployed’ to obtain better jobs and further their financial independence,” Perrin said. “I served on the Board for 10 years and I am still involved on the periphery as a member of the Advisory Committee for the organization.”

She also volunteers for Smith College and had coached her daughter’s Odyssey of the Mind competition team — a STEM track traditionally taken by boys.

“My best advice [for women and girls]is to keep moving forward,” Perrin said. “There have been many times during my career when I have been the only woman in the room — or the only female attorney on a case. I am hard-wired with the type of stubbornness that just doesn’t let me give up. Really. Ever. I’ve always been likely to stand in front of a bully, or call out an injustice, and I’ve never been afraid to just walk up and do what I thought was right. I love being able to do that for CSEA members.”

Perrin said she’d like to think that she sets an example others can see and follow, just as she followed examples before her. She recalls her parents, female professors and attorneys along the way, but also CSEA women that include Sullivan; former Western Region President Flo Tripi and former CSEA General Counsel Nancy Hoffman.

“I can see how just the past 30 years has made an enormous change in the culture of the union,” Perrin said. “And when I get to work with our members and officers and look at the efforts made to change the workplace opportunities for the people we represent — it makes me very proud to work at CSEA.”

Up ahead for Perrin will be her role as second chair counsel for upcoming state contract negotiations. “It is the first time we’ve gone entirely in-house for state negotiations and it is a very exciting opportunity,” she said.