Trending
You are at:Home»Women's History Month»Hudson: ‘When we sit at the table, we are equal’

Hudson: ‘When we sit at the table, we are equal’ 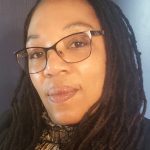 MANHATTAN — Since 1980, Adriane Hudson has gone from a food service worker to union officer and is now union staff, but she feels like she’s never worked a day in her life.

“I love what I do, so it never feels like work,” said Hudson, a CSEA Labor Relations Specialist who is based in the Metropolitan Region.

That drive initially took Hudson from a 20-hour workweek in food service at the Brooklyn Developmental Center to a full-time position as a Mental Health Therapy Aide. A disagreement with management during one of her promotions also proved her mettle as a union activist.

After getting a vacation approved, a new supervisor refused to honor it. Despite warnings to avoid meeting management without a union representative, Hudson, who was already active with the union, felt she could make a compelling case. She not only saved her vacation, she found her calling.

“When we sit at the table, we are equal,” said Hudson. “We all put our pants on one leg at a time.”

It’s a lesson she’s also learned when interacting with male colleagues who may erroneously take her gender, intelligence and tenacity for granted. After working alongside then local President Denise Berkley, Hudson rose up the union ranks to eventually become president after Berkley became the union’s Statewide Secretary, becoming the first Black woman elected statewide in our union.

As a single mother of two children, Hudson has taken every opportunity to advance herself so she can become a better provider for her family and a better unionist for members.

“CSEA has opened a lot of doors for me,” said Hudson. “I can say that I’m very proud to be a part of a member-driven union that works hard for their members and I experienced that as a member. Now, I work hard for members as staff.”

Education has been one of those doors. As a member, Hudson was among the first graduates of CSEA’s Leadership Education and Development (LEAD) Program, which grooms future CSEA activists.

“I needed to feel like I had everything I needed to fight the good fight for members,” said Hudson. She’s also taken courses with the Partnership for Education, the Murphy Institute, a joint Cornell/CBTU leadership academy and as staff, she was awarded a full scholarship to the CUNY Murphy School for Labor and Urban Studies.

“I have seen CSEA from both sides of the fence, as a member and staff,” said Hudson.

Hudson readily admits her admiration for the new Vice President, Kamala Harris, and the legendary poet Maya Angelou, but closer to home, one of the women she most admires is Berkley, who is now CSEA’s Executive Vice President.

“She taught me how to fight, how to listen and how to have confidence when it came to management,” said Hudson. “She instilled such confidence [in me]that when she left, I just fell right in. They were some big shoes, but it was easy. I didn’t miss a beat. I give her kudos for that.”