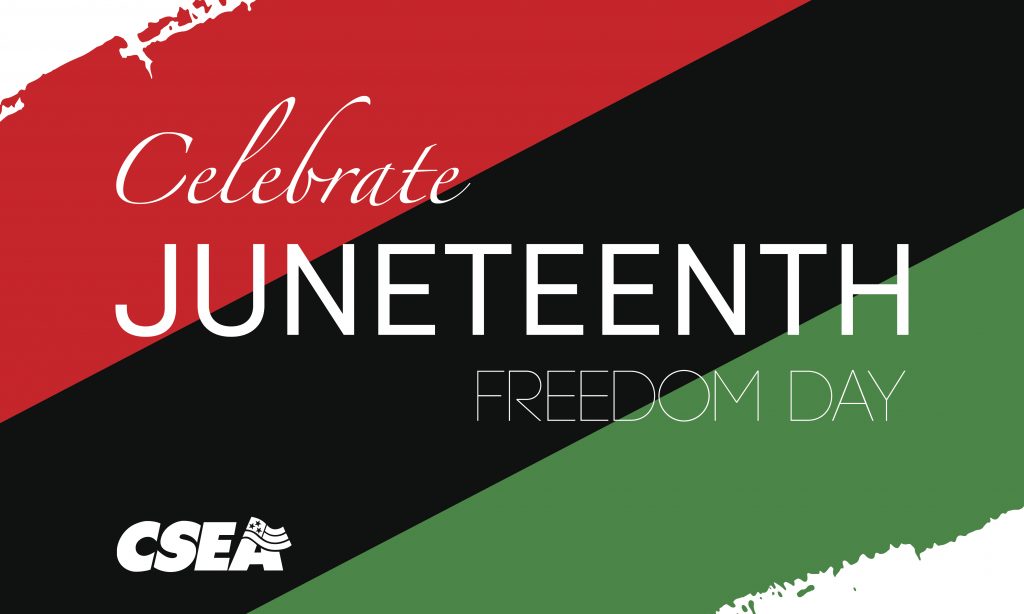 Juneteenth (also known as Freedom Day or Emancipation Day), celebrated on June 19, is the oldest known annual celebration commemorating the end of slavery in the United States.

It was on this day in 1865 that federal troops arrived in Texas to ensure that all Americans were free from slavery.  On June 17, 2021, it officially became a federal holiday.

CSEA members are encouraged to observe this day by celebrating Black history and culture through participation in Juneteenth events in your area. Links to local NAACP chapter are below; contact one in your area to learn about local events.

Read more about Juneteenth
Get involved in local Juneteenth events

On June 17, 2021, President Joe Biden signed legislation, passed by the Senate and the House, to make Juneteenth (June 19) a federal holiday. The holiday’s name is a blending of the words “June” and “nineteenth,” the date of its celebration. The new holiday officially commemorates the ending of slavery in the United States.

For many years, Juneteenth was celebrated in local observances as a remembrance of the announcement of the abolition of slavery in the state of Texas on June 19, 1865. These local celebrations grew to include the emancipation of all enslaved African Americans throughout the former Confederate States of America.

During the Civil War, President Abraham Lincoln issued the Emancipation Proclamation on Sept. 22, 1862, with an effective date of Jan. 1, 1863. It declared that “all persons held as slaves within any State or designated part of a State, the people whereof shall then be in rebellion against the United States, shall be then, thenceforward, and forever free.”

The Proclamation did not free all enslaved people. It did not include the “border states,” which were the four “slave states” not in rebellion — Kentucky, Maryland, Delaware, and Missouri — and those counties of Virginia soon to form the state of West Virginia.

Texas, which was isolated geographically, did not experience many significant battles during the Civil War. In fact, planters and other slaveholders migrated into Texas from eastern states to escape the fighting, bringing enslaved people with them, increasing by the thousands the enslaved population in the state. By the end of the Civil War, there were an estimated 250,000 enslaved people residing in Texas.

On April 9, 1865, Confederate General Robert E. Lee surrendered his army, effectively ending the Civil War. But in Texas, slavery remained relatively unaffected. On June 18, 1865, Union General Gordon Granger arrived at Galveston Island with 2,000 federal troops to occupy Texas on behalf of the federal government. The following day, standing on the balcony of Galveston’s Ashton Villa, Granger read aloud the contents of “General Order No. 3,” announcing the total emancipation of those held as slaves:

The people of Texas are informed that, in accordance with a proclamation from the Executive of the United States, all slaves are free. This involves an absolute equality of personal rights and rights of property between former masters and slaves, and the connection heretofore existing between them becomes that between employer and hired labor. The freedmen are advised to remain quietly at their present homes and work for wages …

When the announcement was read, Black people in Galveston rejoiced in the streets. The following year, the newly-freed people of Texas organized the first of what became the annual celebration of “Jubilee Day” on June 19.

Black people in Texas were barred from using most public parks because of state-sponsored segregation. So, across the state, freed people pooled their funds to purchase land to hold their celebrations in places like Houston’s Emancipation Park, Mexia’s Booker T. Washington Park, and Emancipation Park in Austin.

Can you think of a way to celebrate Juneteenth in your family, your union or in your community?